UK wave power project could be supplying 120,000 homes with carbon-free power by 2018, but will require government backing 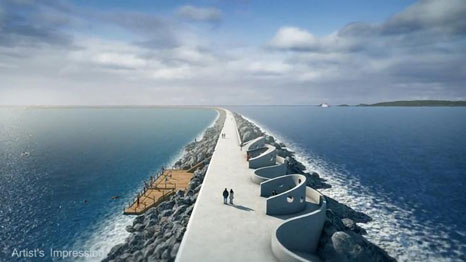 The world’s first tidal lagoon power plant could be powering homes in the UK by 2018, the backers of the project said today, but the scheme will need planning permission and a guaranteed minimum electricity price of around £160 to go ahead.

Tidal Lagoon Power, which is working closely with a consortium of technology and construction companies, today lodged an application to build a 9.5 km sea wall in Swansea Bay in Wales to harness energy from the ebb and flow of tides and power up to 120,000 homes, the company said in a statement.

“Our intention is to supply 10% of the UK’s domestic electricity by building at least five full-scale tidal lagoons in UK waters by 2023, before the UK sees any generation from new nuclear. Economies of scale bring immediate advantage,” said Mark Sharrock, chief executive of Tidal Lagoon Power.

A broader roll-out of tidal wave power would go a long way to helping the UK to meet its commitments to reduce greenhouse emissions as part of a proposed EU-wide reduction target of 40% from 1990 levels by 2030, and help to make the technology available on a global scale.

So far, few tidal power projects have been built worldwide because of high costs and concerns about the impact that projects would have on marine life, but new designs and the need for new carbon-free energy sources mean that the profile of wave power has been increasing in recent years.

Outside the UK, South Korea is the world’s major player in wave power, and the country plans to open a 1,300 megawatt  barrage tidal plant by 2017.

The 240-MW capacity Swansea lagoon scheme could cut carbon dioxide emissions by around 250,000 tonnes a year compared with the current energy mix, the project’s backers say.

The technology would be a much cleaner alternative than new nuclear power stations which will involve the long-term storage of spent radioactive fuel and decommissioning costs.

Tidal lagoon projects work by holding on to water and then releasing it through turbines at both high and low tides, generating electricity.

Local authorities will consider whether the scheme should proceed, taking into consideration the environmental impact of building a seawall, particularly on marine and bird life.

A range of environmental groups has given a positive assessment of the Swansea plan, which uses a different type of technology from a much larger, and highly controversial, Severn Barrage project that was effectively killed off last year.

The Swansea project also proposes wider benefits, such as the reintroduction of the native oyster to Swansea Bay, an offshore visitor centre, and triathlon and water sports facilities.

The UK government refused to give financial backing for a barrage traversing the Severn Estuary between England and Wales, saying it wouldn’t deliver the benefits claimed.

Government commitments on the minimum electricity prices that tidal energy projects can charge will be crucial for their viability.

A landmark energy bill that is progressing through Parliament hasn’t earmarked a potential ‘strike price’ that the operators of tidal projects can charge, but a spokeswoman for Tidal Lagoon Energy said a minimum price of £155-160 per Megawatt hour would be needed for the Swansea project to economically viable.

This compares with a current wholesale electricity price of around £50 per MWh, and is much more than the minimum price of £92.50 that the Hinkley-C nuclear power plant will get over a 35-year lifetime.

Paying operators of renewables and nuclear plants high minimum or ‘strike’ prices is viewed as essential for new investment, but the high cost of energy and the subsidy that new capacity should get has become a major political battleground ahead of next year’s election.

The backers of the Swansea tidal project have tried to soothe fears about the technology’s high cost, adding that costs would fall as more projects are built.

They added that a second scheme is likely to be cheaper than offshore wind, one of the renewable technologies that the government is relying upon to replace ageing coal and nuclear plants and cut carbon emissions.