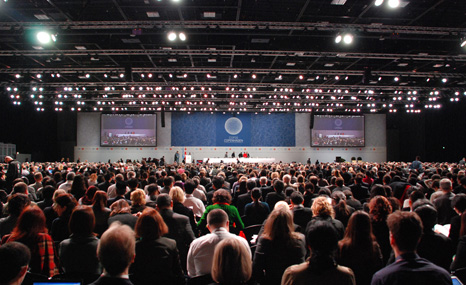 The 15th Conference of the Parties to the UN Framework Convention on Climate Change, Copenhagen (Pic: UNFCCC)

New documents released by National Security Agency whistleblower Edward Snowden reveal how the USA spied on climate negotiators before and during the 2009 UN summit in Copenhagen.

Files marked ‘Top Secret’ published by the Danish website Information suggest the US targeted communications from other countries to ensure it knew the positions of all countries at the talks.

They confirm the NSA provided the US team led by US Climate Envoy Todd Stern with “unique, timely, and valuable insights into key countries’ preparations and goals for the conference”, as well as updates on negotiating strategies.

It is now believed the US was well aware of a secret text the Danish hosts had prepared in advance of the summit, which suggested ditching the Kyoto Protocol, which committed all developed economies to legally binding carbon emission cuts – a treaty Washington has refused to sign.

The resulting Copenhagen Accord acknowledged the dangers of global warming, but did not contain tough commitments from countries to reduce their greenhouse gas emissions.

Speaking from New York, Venezuela’s chief climate envoy Claudia Salerno told RTCC the new revelations are unlikely to affect the current set of talks, but warned that trust between nations is essential for any future agreement.

“I’m not surprised they did that. They did many bad things in Copenhagen and I was the first one denouncing it. It wasn’t just about spying, it was way worse than that. You don’t need to spy, you need to build trust. And that’s what we’ve been doing from Cancun until now.”

“Good faith does not include seeking people’s emails and spying. It’s something that is a red line for Venezuela and many countries. The shocking thing is that it’s one country who had the technology to allow them to spy on others and to violate privacy and respect, and even international relations at large.”

Salerno’s view is significant, given her staunch opposition to the Copenhagen Accord, which led to her drawing blood on her hand to gain the chair’s attention in the closing stages of 2009.

Meena Raman, a negotiations expert from the Malaysian based Third World Network said the revelations could “crack” trust in the USA at a critical moment for the global talks.

“The UN climate talks are supposed to be about building trust – that’s been under threat for years because of the US’s backward position on climate action,” she said.

One EU diplomat RTCC spoke to under condition of anonymity said that there had long been fears over data security, meaning that the bloc rarely prints sensitive documents, and often treats private discussion rooms as if they were monitored.

Asked whether the USA’s extra intelligence fundamentally changed the outcome of the summit, they replied: “I doubt it,” but did suggest security arrangements could be reassessed ahead of the 2015 summit.

A few diplomats have told RTCC they believed most rooms at the 2010 Tianjin talks in China were bugged. Another talked of ‘honey traps’ laid for influential envoys, with one delegate reportedly losing their official phone as a consequence.

The Snowden documents are not the first to identify UN climate summits as a bed of intrigue and dirty tricks.

In 2010 US diplomatic cables released by the Wikileaks site detailed how the US launched a secret diplomatic offensive to ensure the Copenhagen Accord was agreed. This included financial assistance to developing countries in return for support, as well as threats to those who were pushing for a stronger and more comprehensive agreement.

According to Salerno, the latest releases confirm what many have long believed. Behind the green façade, these negotiations are among the most bitterly contested on the planet, and are only likely to get harder as the 2015 date for a global emissions reduction agreement draws close.

“This is not an environmental agreement. It’s one of the largest economical arrangements for the world for the next century. It needs to be treated as such, and that is the complexity of the negotiation itself, that many actually tackle it as an environmental one, and it’s not.”

Significantly, she says the US attitude at the UN talks has slightly mollified since 2009. Big differences remain among all countries, but she says times have changed, even if painful memories of US diplomacy in the Danish capital persist.

“The big lesson from Copenhagen, we don’t need to push anything to happen. Things will happen when everyone is ready, and I think the point we are at right now will not be damaged by any leakage,” she said.

“We had a long way to mature our own relationships among countries and between negotiators, and that is why I’m so confident that whatever is said regarding the past, we are mature enough right now not to talk about it and let that undermine the future.”

NSA FILES: How US spied on negotiators