Climate change is already killing baby penguins in Argentina, which are badly adapted to increasing rainfall 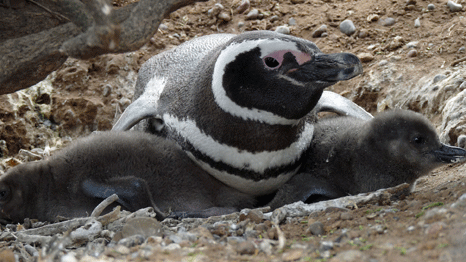 Climate change is killing penguin chicks, which are ill-adapted to increased rainfall, according to scientists from the University of Washington.

Too big to be sheltered by their parents, yet too young to have developed the waterproof feathers that protect them from the rain, fewer penguin chicks are expected to live beyond childhood as a warming world disrupts weather patterns.

“We’re going to see years where almost no chicks survive if climate change makes storms bigger and more frequent during vulnerable times of the breeding season as climatologists predict,” said Ginger Rebstock, co-author of the study which was published today in the journal Plos One.

Armed only with downy feathers, instead of the waterproof coats that they later develop, increased rain and storms mean that more and more chicks will die before they reach adulthood.

This means that the chicks are unable to warm up or dry off after heavy storms in November and December, when temperatures drop. Conversely, it means that when it gets too hot, they are unable to take a dip in the water to cool off.

Scientists from the University of Washington studied a colony of Magellanic penguins in Argentina over a 27-year period. The time span of the observations mean that they were able to measure the impact of climate change, rather than of single weather events, which alone cannot be attributed to changes in global temperatures.

They found that rainfall and the number of storms during the breeding season have already increased at the site, including during the first two weeks of December when all the chicks are less than 25 days old.

Researchers kept close tabs on the penguins during breeding season, visiting the nests twice a day. Whenever a chick disappeared or was found dead, they would scour the area for evidence of starvation, predators or other causes of death.

Over the period, they found that an average of 65% of chicks died each year. There were some years where the climate was the most common cause of death. On average, it killed 7% of the chicks each year, though this rose to 50% in one year, and 43% in another. Adult penguins will only lay eggs once a season, even if their infants die.

Co-author Dee Boersma said: “There may not be much we can do to mitigate climate change, but steps could be taken to make sure the Earth’s largest colony of Magellanic penguins have enough to eat by creating a marine protected reserve, with regulations on fishing, where penguins forage while raising small chicks.”