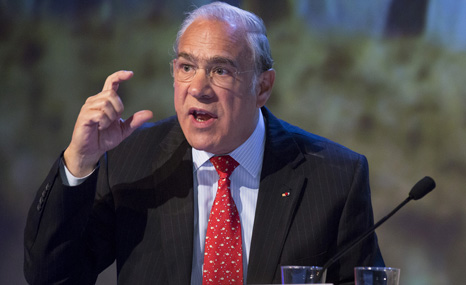 Introducing a price for carbon and phasing out fossil fuel subsidies are two vital measures that can help the planet address climate change.

That’s the view of Angel Gurria, head of the Organisation for Economic Cooperation and Development, a forum for 34 of the world’s most developed countries.

Addressing delegates at the World Economic Forum in Davos, Gurria told leaders to “get to grips” with what he says it the “huge risk” posed by rising levels of carbon emissions.

“Most businesses do not take governments seriously when it comes to climate, primarily because many governments have inconsistent and incoherent policies and then often keep changing them, sometimes retroactively,” he said.

“This makes businesses reluctant to invest in greener technologies.”

Gurria presented the WEF with what he called an ‘action agenda’ (below) to reverse the trend  of rising levels of climate warming gases.

He added: “We are on a collision course with nature. Now is the time for us to take bold decisions. Cherry-picking a few easy measures will not do the trick.”

A plan for zero emissions

Action 1: Put a price on carbon. This can be done through a carbon tax or an emissions trading system (ETS). Here, governments have made important progress, with more than 40 countries having implemented some form of carbon tax or emission trading scheme. The “flexibility” of ETS’s makes them politically attractive, although their design and implementation can be improved.

However, not all governments have shied away from explicit carbon taxes. There are some strong success stories of introducing carbon taxes smoothly and incrementally over time.

Action 2: Reform fossil fuel subsidies. We have to reconsider our approach to subsidies. The OECD recently inventoried support to fossil fuel consumption and production in our Member Countries. The support we uncovered is in the range of US$ 55-90 billion per year. This is in addition to the US$ 544 billion provided as subsidies to fossil fuel consumers in developing and emerging economies estimated by the IEA.

Urgent reform is needed in all countries to phase out fossil fuel subsidies that encourage carbon emissions. While the subsidies are often used to fight poverty, their poor targeting makes them an inefficient way of achieving this goal. Fossil fuel already has a huge advantage as the energy resource of choice. It doesn’t need more help.

Action 3: Address incoherent and inconsistent policies. Governments need to stand back and consider the entire range of signals they are sending to consumers, producers and investors. A key question is whether non-fossil energy investments can currently compete with fossil fuels in terms of their risk-return profile with the policy settings in place domestically and internationally.

To help get a consistent picture and to compare country’ performances, carbon pricing and climate policies will soon be a key element of our OECD Economic Surveys. Thus, by mid-2015 we will have a good idea of the progress and remaining challenges in both OECD countries and key emerging economy partners.