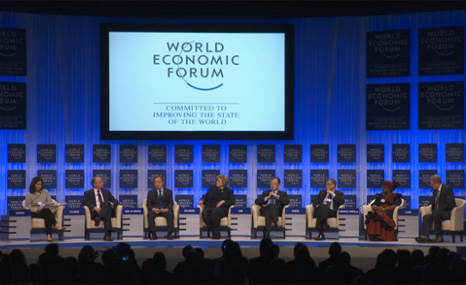 The levels of public and political agreement that climate change needs to be addressed are higher than ever before, Al Gore told delegates at the World Economic Forum in Davos.

Speaking on a panel that included UN chief Ban Ki-moon, Unilever boss Paul Polman and Bill Gates, the former US Vice President argued that extreme weather events like typhoon Haiyan and superstorm Sandy were driving awareness around the world.

“I think that is a gamechanger. It comes about, of course, because we continue to put 90 million tonnes of global warming pollution into the atmosphere every day, as if it’s an open sewer.” He added: “We’re getting closer to a political tipping point”.

Friday in Davos was labelled ‘climate day’, a chance for political leaders, industry executives and the heads of intergovernmental organisations like the World Bank to explain how and why they seen climate change being addressed.

2014 has added significance because Ban Ki-moon has scheduled a climate summit in September, inviting leaders from politics, business and civil society to explain how they can contribute to a UN-sponsored carbon emissions reduction deal slated for 2015.

.@UN #SecGen Ban at #wef14: “Political leaders, please come to my September #climate summit with a decisive vision for the future” @Davos

Unilever’s Polman told the audience the challenges posed by global warming were a “unique opportunity to rally the business community,” suggesting that recent extreme weather events were now making the costs of not investing in climate resilient supply chains and low carbon energy “higher than the costs of not doing the investment.”

Gates called on governments and business to reverse a decline in investment in research and development, warning that energy use was likely to soar in Africa and Asia. “As the poorest are being lifted up, as they’re getting lights and refrigerators, we are going to use more energy. There’s not a scenario here where we use less energy. We have to make the energy we use not emit any greenhouse gases, particularly CO2.”

Speaking from Davos, British solar entrepreneur Jeremy Leggett told RTCC climate change had been taken far more seriously at this year’s event than in previous years. “My experience both in sessions and conversations [at the event] is that the great majority of people take it as a real dynamic that needs to be acted on,” he said.

The Solarcentury chairman also sits on the board of the Carbon Tracker Initiative, aimed at highlighting the financial risk of backing fossil fuels that would drive the planet’s temperature above 2C. After a series of what he described as “private meetings with senior people” on Friday, Leggett said he was confident investors would start to take action: “I predict we will see a lot of action around this during the course of the next year. And that is something that stands to help getting a good climate outcome in 2015,” he said.

Minutes before Gore, Gates and Polman started speaking, a coalition of multinational businesses including Philips, Kingfisher, Veolia, DSM and Indorama launched a drive to save US$ 500 million in materials and prevent 100 million tonnes of waste globally.

Project Mainstream, the brainchild of the Ellen MacArthur Foundation, aims to push leading manufacturers towards a ‘circular economy’, where products are reused once their lifespan comes to an end, rather than thrown away.

“We’re looking at three billion middle class consumers in the next few decades,” said MacArthur. “We need to shift the system to allow those resources to flow back into the system. If you remanufacture you actually take the energy use down to only 25% in a re-manufactured engine compared to a new one.”

Earlier in the day the US, EU, Japan and 10 other leading economies issued a statement outlining plans to cut trade barriers for the $1.4 trillion market in green goods and services.

This would cover areas as diverse as air pollution, managing waste, or generating renewable energy like wind or solar. In a statement the EU Trade Commissioner Karel De Gucht said this would benefit developing countries, who could gain better access to low carbon technologies.

“Today’s commitment is an important trade contribution towards addressing key environmental challenges as part of our broader, ambitious sustainable growth agenda,” he said.