Global cooling? The world is still warming says US agency 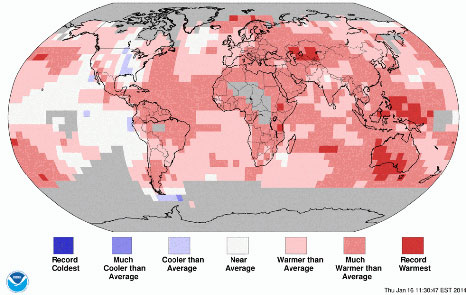 According to NOAA most areas of the world experienced above-average annual temperatures in 2013 (Pic: NOAA)

People who argue that global warming has stopped and the Earth’s average temperature has not risen this century should perhaps read no further.

US scientists say 2013 was the fourth warmest year globally since records began in 1880.

The National Climatic Data Center (NCDC), part of the US National Oceanic and Atmospheric Administration, says in its Global Analysis of the last year that 2013 ties with 2003 as globally the fourth warmest year on record.

The annual global combined land and ocean surface temperature was 0.62°C above the 20th century average of 13.9°C, marking the 37th consecutive year (since 1976) that the yearly global temperature was above average.

The 2013 global average ocean temperature (0.48°C) was the highest since 2010, the last time El Niño conditions were present in the central and eastern equatorial Pacific. El Niño is a periodic weather disruption in the eastern Pacific which affects conditions over thousands of miles.

Regionally, it says, most of the world experienced above-average annual temperatures in 2013.

Over land, parts of central Asia, western Ethiopia, eastern Tanzania, and much of southern and western Australia experienced record warmth. Only part of the central United States was cooler than average over land.

Small regions scattered across the eastern Pacific and an area in the Southern Ocean south of South America were cooler than average. No part of the world experienced record cold in 2013.

Perhaps surprisingly for anyone who thinks of the last twelve months as memorable chiefly for the amount of rain that fell, the NCDC says precipitation measured at land-based stations around the globe was near average on balance for 2013, at just 0.31 mm above the long-term average.

However, it adds prudently: “As is typical, precipitation varied greatly from region to region. This is the second consecutive year with near-average global precipitation at land-based stations.”