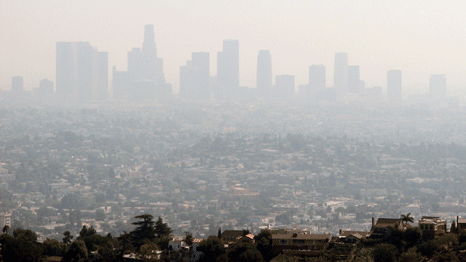 Air pollution in China is blowing over the Pacific Ocean and settling on the west coast of America, causing at least one extra day of dangerous smog in Los Angeles every year.

This is a case of getting what you pay for, according to a new study led by researchers from Peking University in Beijing.

They have calculated that approximately one quarter of the sulphate pollutants that cross into the US are tied to products created within China but destined for American consumers.

“We’ve outsourced our manufacturing and much of our pollution, but some of it is blowing back across the Pacific to haunt us,” said co-author Steve Davis from the University of California Irvine.

“Given the complaints about how Chinese pollution is corrupting other countries’ air, this paper shows that there may be plenty of blame to go around.”

One of the drivers of the economic boom in China over the past ten years has been the demand for its exports. Between 2000 and 2007, the volume of Chinese exports grew by 390%.

At the same time, discontent over hazardous levels of air pollution in cities such as Beijing has been growing. Today, the governor of Hebei, the province surrounding Beijing, threatened to fire any officials who add new steel capacity, and thus increase the amount of coal being burnt.

According to the report, published yesterday in the Proceedings of the National Academy of Sciences, goods exported to the US were responsible for 36% of human-caused sulphur dioxide, 22% of carbon monoxide and 17% of black carbon emissions in 2006.

These pollutants mix together to form the unhealthy smog and soot which shrouds China’s industrial cities. Around 21% can be specifically linked to exports destined for America, say the researchers.

Most of America’s air pollution is produced domestically from cars and refineries, but the research found that as much as a quarter of the sulphate pollution on the US west coast is tied to Chinese exports.

As the US increasingly outsourced its manufacturing to China, sulphate pollution increased in 2006 in the western states, but decreased in the east. This reflects the “competing effect between enhanced transport of Chinese pollution and reduced US emissions,” write the authors.

“When you buy a product at Wal-Mart it has to be manufactured somewhere,” said Davis. “The product doesn’t contain the pollution, but creating it caused the pollution.”

The findings could have an impact upon attempts to strike a deal to reduce global emissions, as it is important that emissions are counted in a fair and accurate way.

The researchers point out that it may be necessary for countries to take responsibility for the emissions produced outside their own borders if they go towards producing items for domestic consumption.

They point out that US emissions of air pollutants would have been 6-19% higher in 2006 if the figures included what was emitted through the creation of goods produced in China for American consumption.