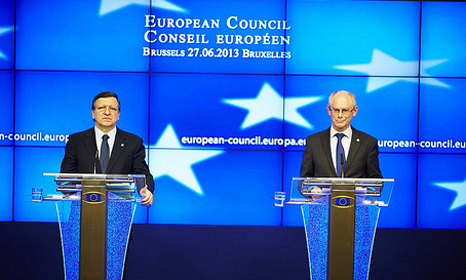 EU policymakers this week will likely propose that the 28-nation bloc cuts carbon emissions 40% by 2030, and how that target should be met, but it could be a year before the energy and climate package becomes law.

The White Paper is much anticipated because it will shape the EU’s climate and energy policies until the end of the next decade, a key staging post for an overall goal to slash emissions by at least 80% by 2050 and help the world avoid the worst impacts of climate change.

“The key difference between what we are likely to see next week and the 2020 package negotiated in 2007 is that this time around there is likely to be less accountability in the White Paper, meaning much more will have to be thrashed out in discussions between governments,” said Brook Riley, an EU policy analyst with green group Friends of the Earth.

The document is expected to propose a 40% cut in greenhouse gases from 1990 levels, which green groups say is a weak additional effort from the 32% reduction delivered as ‘business-as-usual’ in current policies, although it would be stronger than the 35% rumoured to have been included in the White Paper.

“The EU’s impact assessment is based on a cut of 40% so I would be very surprised if it’s not in there. I suspect that the 35% figure has been circulated to make a 40% target look tough, which it isn’t,” Riley added.

A cut of 40% would be viewed as a compromise between those countries that are shifting towards renewables and want to create more jobs in environmental technologies such as wind turbines and solar panels, and those that rely overwhelmingly on fossil fuels and want to protect energy-intensive heavy industries.

Critics say the European Commission’s likely omission of binding targets for renewable energy and energy efficiency will mean that individual member states will lack clear benchmarks and accountability on how they deliver emissions cuts.

The Commission is expected to propose that member states should aim for 24-27% of their energy come from renewable sources, rather than a binding 30% percent requirement contained in an impact assessment that was leaked last month.

Such a proposal would be a key concession to member states such as the UK, which wants an overall greenhouse gas reduction target of at least 40% but has insisted on flexibility to use coal and gas power plants that can capture and store carbon, energy efficiency and nuclear.

Poland would also welcome an outcome where it doesn’t have to meet a threshold on using certain amounts of power from a mixture of wind, solar and biomass, because a radical overhaul of its energy mix would place a unbearable burden on a country that relies on coal for 90% of its power.

“There is a great deal of differences between member states. The division of effort needs to reflect that,” Poland’s climate envoy Martin Korolec told RTCC.

Coal-dependent countries will also be looking through next week’s document to see what the EU’s executive thinks should be done to encourage carbon capture and storage, a technology that would enable the fossil fuel to remain in the energy mix but also deliver lower emissions.

The EC next week is also expected to outline when long-term reforms to the EU emissions trading scheme will come into force.

Emissions trading lobbyists say the EC will propose a possible ‘set-aside’ or ‘reserve’ of allowances – which could help prevent a sustained crash in prices – to come into force until 2021, when the EU ETS enters its fourth phase of trading.

This would build upon measures agreed last month aimed at propping up the market in the current 2013-2020 trading period, whereby 900 million allowances will be temporarily removed from this year, but will be returned to the market towards the end of this decade.

EU policymakers may next week also decide to outline whether carbon offsets could be used to meet emissions reductions targets after 2020 and what types of credits would be acceptable, but observers expect the Commission to take a cautious approach as it tries to repair faith in its carbon trading scheme.

“The EU is more worried about tackling the surplus of permits in the EU ETS and the need for reform rather than designing a specific role for offsets,” said a carbon trading source.

“Everything in the 2030 package will be very closely linked, especially carbon trading and policies that can drive down demand for permits, such as energy efficiency,” the source added.