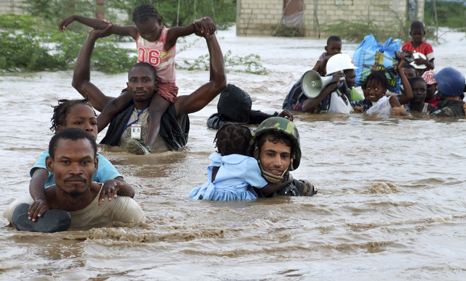 Climate change will cause an increase in drug smuggling, human trafficking and gun running, as “merchants of gloom” take advantage of desperate migrants fleeing across borders.

This is the view Mohamed Mijarul Quayes, Bangladesh’s foreign secretary from 2009 to 2012.

Migration due to climate change could cause problems to state security as criminals take advantage of desperate migrants who are competing for healthcare, education and other resources in already overpopulated countries.

“Security does not mean conflict,” he told RTCC. “The moment you transport a person, there is a security issue. Are you having drugs moving across your border? Are you trafficking a human person? Are you doing gun running? It would have a serious security context for the states involved.”

The absence of any legal recognition for climate migrants makes such a situation appear all the more likely. The 1951 Refugee Convention contains no protection for those who have been displaced due to climate change.

As the problem of climate change worsens, the number of people looking to leave their homes will increase. Today, the UN predicts there are a total of 214 million migrants across the world, including those who have moved for social and political reasons.

A report by Christian Aid predicts that a further one billion people could become climate change migrants between now and 2050. Some of the movement will be seasonal, as people move from certain regions in the dry season or times of excessive rainfall.

Quayes said that leaders will fail to provide legal protection to the millions forced to flee their homes due to climate change if they continue to view the problem as merely a humanitarian crisis.

“People respond better when they see that an issue will impact security,” he said. “Climate induced displacement needs to be seen from the perspective of security so people see a need to act.”

At a panel discussion at the Overseas Development Institute in London yesterday, experts discussed how to address the problem of climate change migration.

“We’re looking at migration as a solution rather than as something that makes you a victim,” he said, adding that for some it could be one way of moving out of poverty. “It’s not a sign that you’ve failed – it’s an sign of a possible route out of increased stress.”

Alex Randall from the Climate Outreach and Information Network said that there needed to be a conversation about the legal, moral and policy questions that arise from seeing migration as a means of adaptation.

“Migration can and, perhaps in the future, should be a positive way for people to adapt to some of the worse impacts of climate change,” he said.

“At the moment it’s very much framed as always being a tragedy, always being something that makes someone into a victim. That is often the case. When people are forced from their home during a disaster, certainly we need to be careful we don’t see that as a way of adapting. Clearly, that’s a maladaptation if you like.”

Quayes stressed that, for many, the question was now of forced displacement, rather than a choice to move away. He recalls a conversation with the now EU Commissioner Connie Hedegaard at the UN’s disastrous 2009 climate negotiations in Copenhagen, Denmark, when it was beginning to dawn on everyone that a legally binding climate deal was impossible.

“She was feeling let down, and she was asking what it all meant. As I sat there in Copenhagen, in the shades of Elsinore, I felt like Hamlet: to be or not to be? For us, that is the question. That is the question for the Maldives, for Vanuatu. It isn’t just a question of migration.”