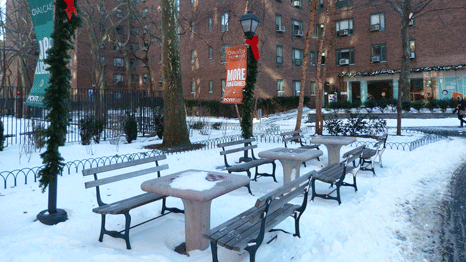 It’s really cold in the US at the moment, with an Arctic front sweeping through the country, causing the coldest weather temperature in almost two decades.

There’s so much snow that Donald Trump has decided that climate change can’t possibly exist.

This very expensive GLOBAL WARMING bullshit has got to stop. Our planet is freezing, record low temps,and our GW scientists are stuck in ice

Apart from the current cold blast, this missive refers to the team of scientists who got stuck in the Antarctic ice during an expedition emulating the 1911 explorations of Sir Douglas Mawson.

While sceptic commentators were quick to point out the irony of this, the UN’s main scientific report confirms that the rate of ice loss from the Antarctic ice sheet has likely increased since 1992.

But his comments have met with backlash from other Twitter users and climate scientists.

“Cold weather is usual in winter, and a few cold days, however extreme, don’t affect the main IPCC conclusions: the trend of global warming is unequivocal and most of that warming is due to pollution by human greenhouse gases,” Jean-Pascal van Ypersele, vice-chair of IPCC, told RTCC.

“The IPCC has also clearly shown that the frequency of very cold events will decrease with global warming in the long run. But one needs to look at decades of data to assess that, not a single event.”

Ed Hawkins, a climate scientist at the University of Reading who speacialises in the variability and predictability of climate, told RTCC: “It is currently winter in the northern hemisphere, and so there is a good chance of getting wintry weather, including snow, even in a warmer climate.”

He has written in a blog post arguing that even in a future where little is done to limit greenhouse gas emissions, the world can still expect a smattering of white Christmases up until the end of the century.

The comments come at a crucial time for US environment policy, as President Obama works on rolling out his Climate Action Plan, bypassing congress to impose curbs on national greenhouse gas emissions. Billionaire businessman Trump is not alone in seizing upon America’s cold winter as ‘proof’ that global warming is a scam.

Republican Congressman John Fleming also took to Twitter to mock climate scientists over the icy blast, while a conservative political blogger Erick Erickson threw some religion into the mix.

A lot of liberals on twitter want me to know God is fake and global warming is real. Bet they have their heater on today too.

But NASA explains that there is a difference between ‘climate’ and ‘weather’. Climate scientists examine the changes that have taken place over a long period of time in the climate, while weather is what takes place on a moment-by-moment basis.

“Weather is basically the way the atmosphere is behaving, mainly with respect to its effects upon life and human activities… Climate, however, is the average of weather over time and space, “says NASA.

“An easy way to remember the difference is that climate is what you expect, like a very hot summer, and weather is what you get, like a hot day with pop-up thunderstorms.”

The current Arctic cold front to sweep through America does not undermine the long term changes that have taken place in the planet’s atmosphere as concentrations of CO2 increase.

As the latest report from the UN climate body the IPCC says: “Each of the last three decades has been successively warmer at the Earth’s surface than any preceding decade since 1850.”

Based on the response on Twitter, many appear to wish Donald Trump would take his own advice, tweeted the following day, and learn a bit more about the science of climate change.

A regular part of your day should be devoted to expanding your horizons. Learning is a new beginning.