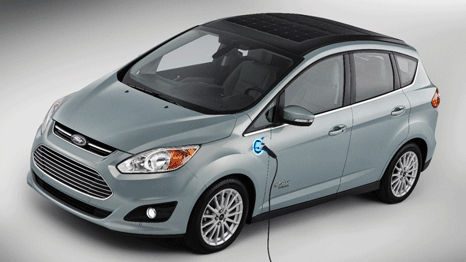 Ford’s latest creation will save each driver up to four tons of CO2 a year (Source: Ford)

Ford has got a bright idea – an electric car with solar panels on the roof.

The new Ford C-MAX Solar Energi Concept car can capture enough sunlight in a single day to keep it charged for four hours.

The hybrid vehicle is the first of its kind to be self-sufficient in this way. All other electric cars – a cleaner alternative to their petrol-burning brethren – still have to connect to the electric grid to charge up.

“As an innovation leader, we want to further the public dialog about the art of the possible in moving the world toward a cleaner future.”

With a full charge, the C-MAX Solar Energi Concept is estimated to be able to travel up to 620 miles, including 21 electric-only miles. Ford believes that the sun has the potential to power up to 75% of all trips made by the average driver, if they switch over to a solar hybrid vehicle.

This could significantly reduce a driver’s carbon footprint. Ford promises that the car would reduce a US driver’s yearly greenhouse gas emissions by as much as four tons – or the amount produced by a US house in four months.

If all light duty vehicles in the US switched over to the new car, annual greenhouse gas emissions could be reduced by one billion tons.

To make sure that the solar panels were efficient enough to power up the cars quickly, researchers at the Georgia Institute of Technology drew inspiration from an unusual source: lighthouses.

A special magnifying lens, which was originally developed to warn sailors away from dangerous rocks, amplifies the sunlight, boosting its impact by a factor of eight, ensuring that the car is suitable for daily use. The system tracks the sun as it moves from east to west. It can also connect to the electric grid.

The car will be on display at the 2014 International Consumer Electronics Show in Las Vegas from the 7-10 January.