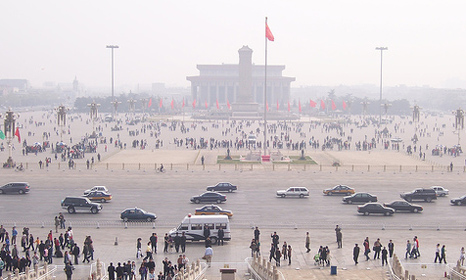 1 – Fossil fuels main cause of Beijing smog
Fossil fuel combustion makes the largest contribution to Beijing’s deadly air pollution, according to a new study by the Chinese Academy of Sciences. The Think Progress website reports that the study found that coal burning, industrial pollution and secondary inorganic aerosols are altogether responsible for 69% of the city’s haze, while the burning of trash, and Beijing’s 5.5 million cars, were found to be responsible for just 4%.

3 – North Dakota train fire adds to Keystone debate
A fire on a North Dakota train carrying oil has added fuel to the Keystone XL pipeline debate in the US, Bloomberg reports, raising questions about the safety of transporting oil across the country. More than 2000 residents were urged to evacuate after the flames, following a crash, spewed dangerous fumes across the area. Obama is expected to deliver his verdict on the controversial pipeline this year.

4 – Scottish government slashes its air miles
The Scottish government has saved around £2.9m and reduced its carbon emissions by 28%, after cutting flying in favour of video and web conferencing. Business Green quotes new figures from WWF Scotland confirming that the government took around 3000 fewer business flights per year between 2007 and 2012.

5 – Deep sea marine life to decline with climate change
A new study shows that climate change will have a significant impact on losses in deep sea marine life, reports Azo Clean Tech. The team of international scientists predict that life on the sea bed will decline by up to 38% in the North Atlantic and over 5% globally in the next century due to a reduction in the plants that live at the surface of the oceans.