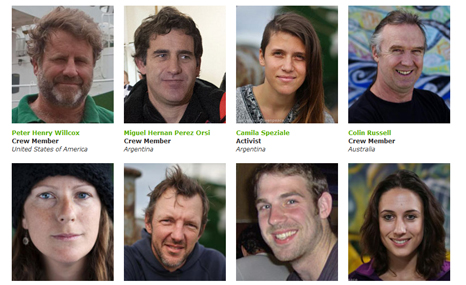 Greenpeace activists who spent two months in Russian prisons for protesting against Arctic drilling for oil and gas have been granted an amnesty by the Duma.

The Russian Parliament today voted for an amendment granting amnesty to defendants charged with hooliganism, which covers the 30 strong crew of the Arctic Sunrise ship.

According to a statement released by Greenpeace the a final vote at 4pm Moscow time (12 GMT) confirmed the 26 foreign nationals in the crew are free to leave Russia.

Legal proceedings against the campaigners, who were recently released on bail, are also set to come to an end. They were arrested on September 18 following protests at an Arctic offshore oil rig.

Captain of the Arctic Sunrise Peter Wilcox says he is relieved that his ordeal looks set to end, but angry that the crew were detained for so long.

“We sailed north to bear witness to a profound environmental threat but our ship was stormed by masked men wielding knives and guns,” he said.

“Now it’s nearly over and we may soon be truly free, but there’s no amnesty for the Arctic. We may soon be home, but the Arctic remains a fragile global treasure under assault by oil companies and the rising temperatures they’re driving.

“We went there to protest against this madness. We were never the criminals here.”

It’s unclear what the fate of the four Russian nationals in the Greenpeace party will be.

“Right now my thoughts are with our Russian colleagues. If they accept this amnesty they will have criminal records in the country where they live, and all for something they didn’t do,” said Ana Paula Maciel, a Brazilian who was also on the ship when it was taken over.

According to Greenpeace the campaign to free the Arctic 30 has seen 860 protests in 46 countries and in more than 150 cities worldwide.