Over 5 million UK homes at risk of flood each year, but climate change ignored in new government flood insurance plan 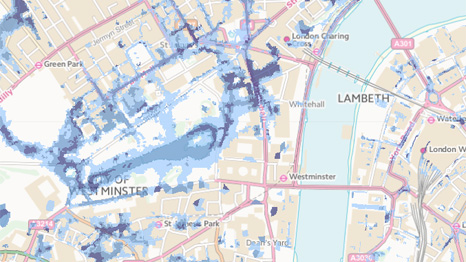 Three million properties are at risk of surface water flooding in the UK, including Downing Street, home of the British Prime Minister, according the the country’s Environment Agency.

Taking into account the 2.4 million homes also at risk from river and sea water flooding, this equates to about one in six homes across the country which could be damaged.

New interactive maps reveal that many parts of central London faced a greater than one in 30 chance of surface water flooding this year, which occurs when intense rainfall overwhelms the drainage system.

This is much harder to predict than river or sea flooding, as it is difficult to forecast exactly where or how much rain will fall in any storm.

“Last week’s storm surge brings into sharp focus how important it is that people know if they could be affected by flooding,” Dr Paul Leinster, Chief Executive of the Environment Agency said.

Despite the government’s own projections for sea level rise of between 13 to 76cm by 2095 due to climate change, a new flood insurance plan, Flood Re, does not take into account the likelihood of the growing intensity or frequency of flooding.

The details of Flood Re are still being finalised, but the programme as it stands is likely to cover just 500,000 homes, and does not take into account the likelihood of increased flooding as the climate warms.

Guy Shrubsole, who is campaigning with Friends of the Earth for the new scheme to include the impacts of climate change, said: “Millions of homes across the UK are under threat from surface water flooding – and with scientists predicting more extreme rainfall as climate change takes hold, this number is set to rise.

“In the light of all the scientific evidence it is astonishing that the Environment Secretary’s new flood insurance scheme fails to factor in risks from both surface water flooding and future climate change.

“MPs must take action by insisting that the Government fixes its flawed insurance scheme, invests properly in flood defences and does more to cut carbon emissions.”