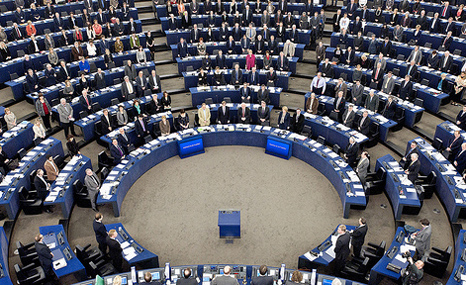 The European Parliament today backed a rescue plan for its stuttering carbon market, a move seen as essential to control greenhouse gas emissions in the region.

It’s likely to ensure the release of 900 million euros worth of permits is postponed till after 2020. The market already has a glut of an estimated two billion credits, ensuring their price remains low.

The EU emissions trading scheme is the largest in the world, and is designed to encourage heavy polluters to invest in cleaner, low carbon technologies.

Its effectiveness is seen as central to the EU’s climate strategy, which is set to be updated with new and more ambitious emission reduction targets at the end of January 2014.

Member states will now discuss this temporary fix, with a final decision to be taken by the European Council.

The view from Parliament:

And finally we can close the backloading file. 385 in favour; 284 still in denial; 24 confused and abstain.

#backloading One by one the proposals are adopted – getting ready for the next big climate step: the @EU_Commission 2030 proposal in January

How did the markets react?

EU agrees temp reform of ETS – but surplus allowances mean proposed 40% GHG target for 2030 is in reality only 33% http://t.co/yy8en5v2IV