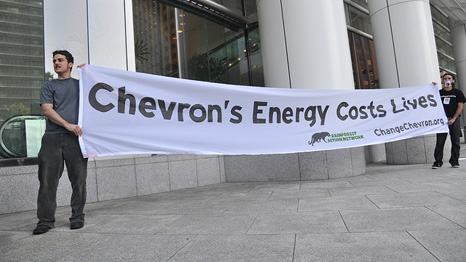 1 – Protests force fracking delay in Romania
US oil compant Chevron has postponed fracking work in the Romanian town of Pungesti following mass protests from about 300 local people. An equal number of riot police were called out to restrain the activists, but Reuters reports that some broke through, causing Chevron to delay activities for the second time in two months.

2 – Australia fire service should double its numbers
The Australian fire service will have to double their numbers by 2030 to cope with the increased bushfire risk caused by climate change, reports the Guardian. According to a new report from the newly independent Climate Council, Australia has just experienced its hottest 12 months on record, and the fire season will extend into October and March in the coming years.

3 – Japan signals return to nuclear power
Draft energy policies on the Japanese government website are the strongest indication yet that the country will return to nuclear power, due to the high cost and global warming implications of using replacement fossil fuels, Bloomberg reports. This is a shift from the government’s previous intention to phase out nuclear by the end of the 2030s.

5 – Thawing ice linked to Europe, US heatwaves
Thawing Arctic ice and snow is linked to worsening summer heatwaves and downpours in Europe, the US and other areas, say scientists in a new report. Reuters reports that this underlies the scale of the threat posed by global warming, but that some experts deemed the report “inconclusive”.