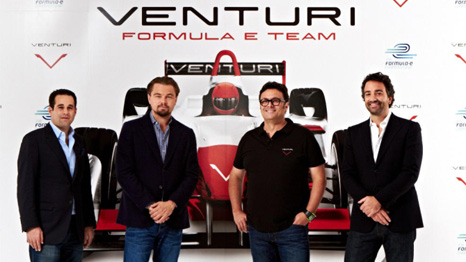 The actor, a long-time environmentalist better known for sinking ships than electric cars, has co-founded the new Venturi Grand Prix team in Monaco alongside Gildo Pallanca Pastor, the company’s founder.

“The future of our planet depends on our ability to embrace fuel-efficient, clean-energy vehicles,” DiCaprio said. “Venturi Grand Prix has shown tremendous foresight in their decision to create an environmentally friendly racing team, and I am happy to be a part of this effort.”

The Grand Prix will launch next year in September, when the ten teams will go head-to-head in ten cities across the world, including Beijing, Los Angeles and London.

As the manufacturer that currently holds the world land speed record for electric vehicles of 495km/h, it looks like DiCaprio’s Venturi team could be a real contender.

But he will face tough competition, with teams from Audi and Richard Branson’s Virgin also in the running.

The racing series is designed to support the electric vehicle market while promoting a sustainable new generation of cars.

Co-founder Gildo added: “Venturi has been a pioneer in electric high performance vehicles for more than a decade and Formula E gives us the fantastic opportunity to further improve our advanced technologies through motorsport, as well as compete all over the world.

“It also gives us the chance to be part of a new racing programme with a project that really shares Venturi’s values for clean mobility, innovation in the field of electric propulsion and energy efficiency optimisation.”