Thames Barrier to close as UK prepares for severe flooding 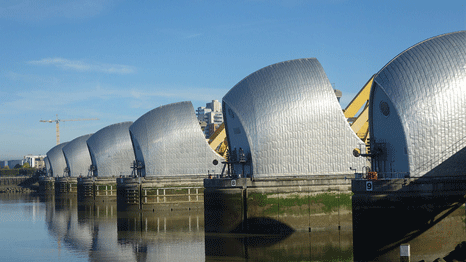 The UK’s ability to cope with rising sea levels and flooding will be tested over the next 48 hours, with a variety of weather factors combining to place low-lying areas at risk of being submerged.

Gale-force winds of up to 50mph are predicted, while tidal surges and high tides will cause flooding from the North Sea coast to the Thames Estuary.

The Environment Agency has issued severe flood warnings for Kent, Norfolk and Suffolk, warning that lives could be in danger as storm surges cause water to rush into towns in these areas.

Some areas, including Great Yarmouth, are being evacuated. It has warned that this could be the worst tidal surge in 60 years.

While individual weather events cannot as yet be attributed to climate change, the tidal surge will test the country’s ability to cope with extreme weather events, and is likely to highlight parts of the land at acute risk from sea level rise.

London’s Thames barrier will be shut at 10pm tonight to protect the capital city from the floods. Since the Thames Barrier opened in 1983, it has been used 119 times.

This figure has increased over the last three decades, with over two thirds of these closures taking place since 2000. It was closed just four times in the 1980s, compared to 80 times since 2000.

According to the Environment Agency, the Thames Barrier will have to close more frequently as sea level rises. This could cause a problem as the risk of the barrier failing is increased the more it is closed. 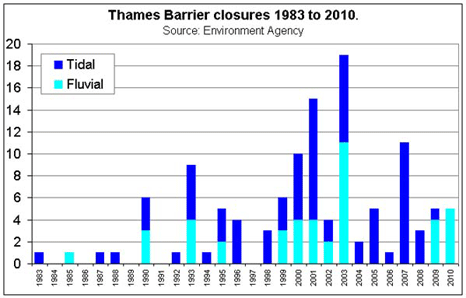 John Curtin, the Environment Agency’s Head of Incident Management, said: “Coastal paths and promenades will be highly dangerous as there is an increased risk of people being swept out to sea.”

Environment Secretary Owen Paterson, a vocal climate sceptic who believes global warming can have a positive side, will chair an emergency meeting on the storm.

“People get very emotional about this subject and I think we should just accept that the climate has been changing for centuries,” he said earlier this year.

A recent UN climate science report published in September indicated that countries in Europe may have to get used to more events like this in decades to come.

The study confirmed that sea levels have risen faster since the mid-19th century than the average for the previous two thousand years. It is very likely to continue to rise over the coming century, it said.

The report added that it remains difficult to predict how this will affect individual regions, and there is low confidence on its effect on storm surges.

A report from the government’s environment department projects that the ocean surrounding the UK coast will rise from anywhere between 13 to 76cm before 2095. It says that a corresponding rise in storm surges will combine with this to produce changes in extreme water levels.

According to a study released this week, rising sea levels are a prominent threat across the Atlantic and North Pacific, where eroding shorelines will exacerbate the damage done by hurricanes to property in the region.