Wind could generate 18% of global electricity by 2050 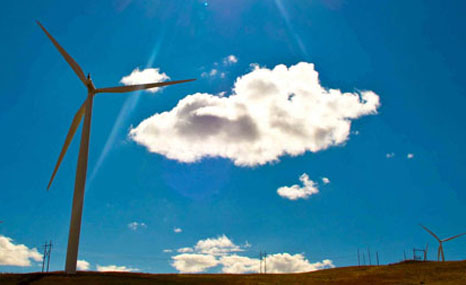 Wind in China is overtaking the rest of the world.

Electricity generated from wind could soar from 2.6% today to 18% of the world’s electricity by 2050, according to the International Energy Agency.

Its latest Wind Power Technology Roadmap says the industry will need $150 billion per year to achieve this. Current investment is hovering around the $80 billion mark.

Wind power deployment under this vision would save up to 4.8 gigatonnes of CO2 emissions per year by 2050, equivalent to more than the current European Union annual emissions.

China, which has doubled investment in renewable energy between 2004 and 2012, would provide the largest reductions.

“While world leaders pay lip service to combating climate change, what they are actually doing is subsidizing CO2 emissions to the tune of US$110/tonne. Fossil fuel energy subsidy reform could take us a long way towards protecting the climate,” Steve Sawyer, secretary general for the Global Wind Energy Council (GWEC) told RTCC.

The cost of land-based wind power is close to competitive with other sources of electricity. Offshore wind is currently expensive and technically challenging, but has an important long-term potential, according to the IEA.

In Australia and Brazil, wind energy is already cheaper than conventional energy sources.

Some European countries already draw 15-30% of their electricity from wind power, thanks to improvements in forecasting, increased interconnections, demand-side response and storage.

Turbines are getting higher, stronger and lighter, while masts and blades are growing even faster than rated capacity, allowing them to capture lower-speed winds and produce more regular output.

The GWEC believes wind could provide 1,000GW by 2020, provided the necessary financial support and policy stability is provided.