UN climate talks: how did countries come to agreement in Warsaw? 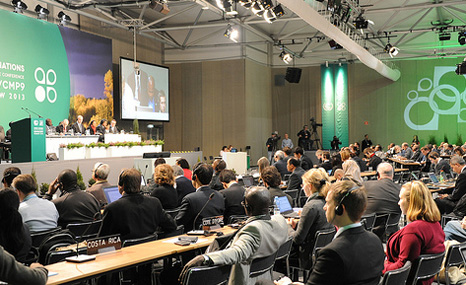 The outcome of two weeks of negotiations at the UN’s 2013 climate talks hung in the balance as darkness descended on Warsaw last Friday.

For many delegates it marked a second, or even a third night without sleep. Despite the arrival of ministers, discussions appeared to be going nowhere.

The EU’s Connie Hedegaard and Venezuela’s Claudia Salerno had earlier traded blows through the media. Salerno went low, saying Hedegaard had “already damaged one summit”, referring to the 2009 talks held in her homeland Denmark, and would be blamed for damaging this one too.

Insider media briefings from both sides went into overdrive, as closed meeting merged into closed meeting, and a pungent smell of body odours, coffee and Polish pizza snaked through the corridors.

But what goes on in meetings? How do countries make their points? On what basis are international treaties established?

Below are 43 pages of notes from a closed meeting focusing on the Durban Platform [2015 global deal] track of talks held at COP19 on the Friday night.

We’ve taken out the names of those who wrote them and any other lines that reveal the identities of the authors – but left everything else untouched.

They convey the level of detail negotiators dig into, the frustration felt by the chairs, and the value often placed on one word, or phrase in texts.

Above all they reveal the deep levels of anger from developing countries at the lack of financial support and mitigation ambition from richer nations, an issue that will need to be addressed ahead of any legally binding global climate change deal.