Reaction from PwC, KPMG and Institutional Investors Group on the COP 10 climate summit 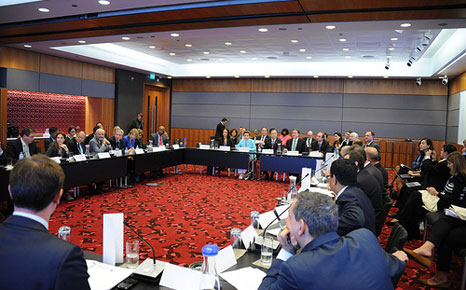 Jonathan Grant, director, PwC sustainability and climate change
“By taking us to the brink of collapse, looking over the edge and then pulling back, we come away feeling delighted that any progress has been made at all. A victory was always expected, but like the England football team, the COP made this a lot more dramatic than it needed to be.  The ‘talks about talks’ phase is now over, as countries agreed the agenda for the negotiations and the timeline for coming up with some numbers. With the increasing complexity of these summits now, there are a host of decisions, on finance, loss and damage, and the carbon markets that will take time to digest.”

Sad to see so many proud nations trying to hide behind the poor and re-write what they agreed at the climate summit in Durban.

@juliettelucie the corporates stuck around to make sure their voice is heard. Politicians need to know they have backing for bravery.
— Yvo de Boer (@yvodeboer_KPMG) November 23, 2013

Legal Sector Alliance, which represents 270 law firms and organisations in the UK

“The nature of the threat posed by climate change means that there is an urgent need for mitigation and adaptation programmes to be incorporated as a matter of course into national law. The Legal Sector Alliance calls upon governments to adopt regulations on a global scale to achieve this and to implement any commitments they make at the Warsaw conference (COP19/CMP9) expeditiously and in accordance with these principles. By being creative and adopting a proactive approach governments can support businesses and individuals in reducing greenhouse gas emissions, creating the opportunity for new jobs, economic growth and improved global living standards.

Stephanie Pfeifer, chief executive of the Institutional Investors Group on Climate Change, which represents over 85 of Europe’s largest investors

“The agreement on a timetable leading to Paris in 2015 is an important step but the actions needed to back this up must start now. Mobilising climate finance will be central to a global deal in two years’ time and the only way this can be achieved is if public bodies and private investors work together. This means putting policy frameworks in place which are truly long-term, enshrined in legislation and provide meaningful support for investors who want to back low-carbon energy.”

“These climate negotiations seems to drain optimism out of you. I’m more so surprised by the lack of engagement between the negotiation process and business. I think that’s [COP 19] better than Copenhagen, so that I think is our glimmer of hope. The other glimmer of hope is the other negotiations between China and the US. The other thing is we’ve got Angela Merkel in place, we’ve obviously got Obama in place and we’ve still got a [UK] coalition government that’s supported action on climate change. All of those things could change after Paris so we may not have the political leaders in place who have the appetite for these kinds of climate deals. I really do think that it’s all or nothing for Paris for a decade.”

Siemens @ #c4cbiz:If we cant deploy cleantech innovation at home, we cant sell it to other countries.We need ambitious policy for ref cases