Reaction from the EU, USA, China, UK, Small Island States, UNFCCC and Polish Presidency to the end of the COP19 climate summit 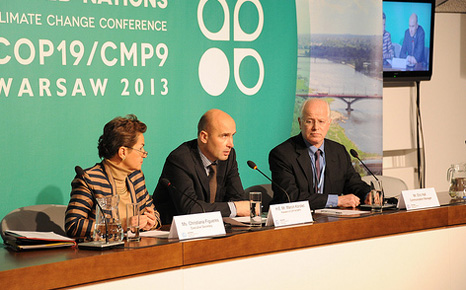 EU climate chief Connie Hedegaard: “There are many ways of getting to Paris. You can do it in a faster way, and you can probably find a more beautiful route, but we found the way I think. It took a lot of effort, you see a lot of drama but I think when people saw we might not make the progress we so badly needed then there was this understanding that there was something to be gained on financing, on loss and damage…something the most vulnerable countries have been chasing for 20 years. We are actually progressing substantially on this. It’s a big step forward, and I think there was very political pressure on parties to agree on the step wise approach to Paris. We came for a timeline. You can see in the text the timeline was in there. We came here saying everyone should go home from Warsaw to do their homework, in the European Union we are going home and doing exactly that, preparing our targets for 2030.”

US lead envoy Todd Stern: “The new draft [text on this part of the talks] is in our judgment an improvement on the previous one. It still does not do all the things it needs to do: there could be stronger language indication an effective timeline to drive forward, to give greater clarity about what initial commitment should be put forward … so that everyone from the press, thinktanks, civil society can review and analyse the process. There are still some things we and other countries are pushing to see [in the text] as it comes along. But it’s still a step forward.”

UK energy and climate chief Ed Davey: “The UK’s key objective for the Warsaw climate change talks has been met.  All nations have now agreed to start their homework to prepare for a global climate change deal in 2015. The world now has a work programme, with timetables. While the long negotiations in Poland showed there are many tough talks ahead of us, the determined diplomacy of the UK and EU achieved our aims, building alliances with our friends across the world. From a new rulebook and finance to strengthen our work to tackle deforestation around the world to a vital new package on measuring, reporting and verifying emissions, this was a conference that dealt with the nuts and bolts for the global agreement we believe is possible in 2015.”

China lead negotiator Xie Zhenhua: “There are many issues that we are not satisfied with but we can still accept…on the surface, the three issues [loss and damage, finance & 2015 global deal pathway] are all solved, but in substance, they are not. They just made a decision to agree to continue to pay for the fund during the period, but had made no commitments on when, how and how much this would be paid. In the end, what they did is just painting a pie. On this point, developing countries are really disappointed.”

Ambassador Marlene Moses, Alliance of Small Island States (AOSIS): “The Warsaw climate talks opened against the backdrop of the horrific tragedy caused by Super-Typhoon Haiyan in the Philippines, one the strongest storms in history, and only the latest in a series of extreme weather events fueled by climate change. Our Member States of Palau and the Federated States of Micronesia were hit by the storm as it gathered strength on its path to the Philippines, only narrowly escaping its full wrath. The science, the storms, and the suffering are all screaming at us to take urgent action, and though it may be too late for those devastated communities in the Philippines and so many other vulnerable communities already suffering climate impacts, we can avert more needless tragedies if we act now, but it has to be well before 2020. The ADP Workstream 2 on short-term mitigation launched in Warsaw is the best opportunity we have to implement policies and technologies that we know rapidly lower emissions. We call on the world’s leading experts in these areas to join us in this effort, because we’ll need all the help we can get to bring emissions down to the level required in the vanishingly small time we have left to do it.”

UN climate chief Christiana Figueres: “We have seen essential progress. But let us again be clear that we are witnessing ever more frequent, extreme weather events, and the poor and vulnerable are already paying the price. Now governments, and especially developed nations, must go back to do their homework so they can put their plans on the table ahead of the Paris conference.”

COP19 President Marcin Korolec: “Warsaw has set a pathway for governments to work on a draft text of a new universal climate agreement so it appears on the table at the next UN Climate change conference in Peru. This is an essential step to reach a final agreement in Paris, in 2015. [On the forests financing deal] I am proud of this concrete accomplishment. We are all aware of the central role that forests play as carbon sinks, climate stabilizers and biodiversity havens. Through our negotiations we have made a significant contribution to forest preservation and sustainable use which will benefit the people who live in and around them and humanity an d the planet as a whole. And I am proud that this instrument was named the Warsaw Framework for REDD+.”

South Africa Environment Minister Edna Molewa: “We have not diluted the convention, even a contribution helps us somehow ascertain that those countries who stayed out will now be part of the efforts to tackle climate change. We are going forward.”