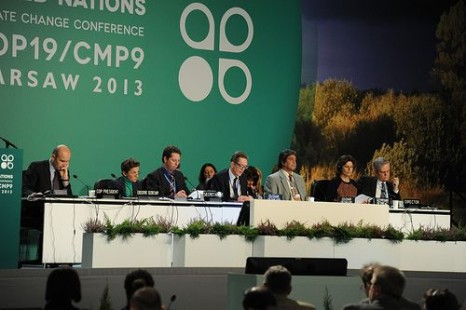 UN negotiations to develop a global climate treaty in 2015 remain in stasis, with deep divisions between envoys over the levels of responsibility rich and poor countries need to take for global warming.

The Warsaw summit was set to conclude on Friday, but ran on throughout the night, with reports of increasingly angry and frustrated discussions behind closed doors.

“Our expectations have been shattered, we are saddened,” said Bangladesh’s lead negotiator Quamrul Chowdhury. Speaking for the G77 and China, Fiji’s Sai Navoti added: “We are beginning to wonder really…the available outcome of the talks we are having.”

Two main issues lie at the heart of the deadlock the Polish capital. One is the financial resources on offer to developing countries.

The second is if, how and when the 194 countries taking part in the process will reveal what greenhouse gas targets they are willing to accept ahead of 2015.

Rich nations have promised to deliver $100 billion a year in funding for developing states by 2020, a significant increase on the $10 billion a year provided between 2010-2012.

Funding pledges have been made during the past two weeks. The EU says it will direct €6 billion towards climate projects, along with $150m to the Least Developed Countries fund.

But there is deep frustration among the G77 and Least Developed Countries that a draft text on finance offers no strong or specific commitments on channelling public funds between now and 2020.

Bolivia’s Rene Orellana says he is “very much disappointed” with the current text, while the Philippines envoy labelled it “unbalanced”. The head of the US delegation Todd Stern described it as a “difficult compromise”, but warned against further discussions at the current meeting.

It also seems unclear what form a promised ‘roadmap’ towards the scheduled 2015 climate meeting in Paris will take, and whether it means all participating countries will be compelled to offer firm greenhouse gas targets.

A negotiating text refers to “intended nationally determined commitments,” but major emitters like India and China are reportedly unwilling to agree anything that could oblige them to make firm pledges within the next year.

The EU is set to reveal its 2030 targets in January 2014, while the world’s second-largest emitter the USA says it will publish its own ambitions in the first quarter of 2015.

“This is a delicate compromise, but we can live with the package as it stands,” said EU negotiator Pete Betts. “There is a sense of milestones and that we are stepping up momentum, and important we agree that text with that package.”

Separately, a new text relating to a mechanism aimed at helping countries deal with destruction caused by climate-related events was released on Saturday morning.

Developing countries want a separate mechanism focused on this issue, rather than one under an existing adaptation framework.

ActionAid’s Harjeet Singh told RTCC the current proposals were “disappointing”, saying they undermined the concept of loss and damage being “beyond adaptation.”

He added the new text represented progress, but said it was “two steps forward and four steps back.”

The devastation caused by Typhoon Haiyan in the Philippines increased pressure on countries to discuss what is a contentious issue among rich nations, who fear they could be liable to pay out billions in compensation.

Last week Yeb Sano, head of the Philippines delegation, announced he would fast until any “meaningful outcome” was reached. Earlier this morning he tweeted: “No meaningful outcome in sight. I still stand with honor. Fasting goes on.”