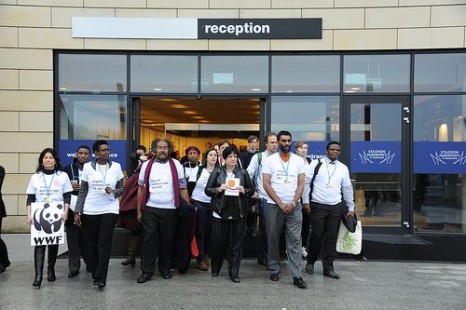 There are growing concerns in Warsaw that progress towards a global deal is stalling, with the Polish presidency standing in the way of an effective climate change treaty.

One diplomat speaking anonymously told RTCC that Poland, the country hosting the UN climate talks, is prioritising its national interest in coal over advancing a new deal designed to reduce global emissions.

Other countries accused of blocking progress towards a 2015 deal include China, Brazil, India and Venezuela.

A new text outlining how and when the new deal should take place was branded “terrible” by UN chief Christiana Figueres, with EU climate commissioner Connie Hedegaard condemning it as “weak”.

The document, now in its third draft, remains vague on how the world can progress to the legally binding treaty that all countries have agreed to sign two years from now.

Critically, it does not resolve the question of what commitments all countries need to take. Previous UN agreements have been designed under a 1992 framework which stipulated the responsibilities of developed and developing countries.

“An agreement based on 1992 categories that are unchanging will not work,” the USA’s lead climate envoy Todd Stern told a plenary session today, a stance Hedegaard backed up.

While rows between the developing and developed world at climate talks are not unusual, there is a lingering frustration among many parties that negotiations appear to have gone backwards.

Earlier today Greenpeace, Oxfam, WWF, Actionaid, Friends of the Earth walked out of the conference, saying they are “on track to deliver virtually nothing”.

The current text relating to a 2015 deal is likely to form the basis of any agreement that emerges from discussions in Warsaw. These are scheduled to end tomorrow, but many delegates believe Saturday morning is more realistic.

While this summit is not expected to harness any concrete pledges from the 195 countries involved, it is hoped it can lay the groundwork, enabling countries to come forward at some point between now and 2015 with promises on how they will reduce their emissions.

A spokesperson for the EU told RTCC that the current draft of the text “does not reflect the urgency and the need for a concrete timeline. We believe there has to be the political will to say when countries are going to do what, and we need to do that as soon as possible.”

He added that countries were no longer divided based on old rifts between the developed and the developing world. Instead, he called it a confrontation between the “willing and the unwilling”.

“There are positive forces in both developed and developing countries who want a global deal,” he said, citing Columbia, Chile, Mexico and the Marshall Islands as positive forces within the negotiations. He said that the EU was now working with these countries and others to try to secure a stronger version of the text before the week is out.

Belgian environment minister Melchior Wathelet told RTCC: “Since the beginning of the negotiations, this basic level of trust has not been built. There are still days to go and I’m sure Connie Hedegaard will continue to be frank and say what is important for Europe in building trust up to 2015.”

The EU is determined to leave Warsaw with a clear roadmap of when and how countries will start making emission reductions and financial pledges, ahead of a summit in Paris scheduled for 2015, which will form the basis on a new legally binding global treaty on climate change.

After initially being perceived as stepping down from the leadership role it traditionally plays in UN climate negotiations, the EU has started to reapply the pressure this week.

The bloc has now confirmed plans to release its emission reduction pledges for 2030 by 22nd January 2014—the first alliance of countries within the negotiations to do so—and earlier this week announced that 20% of its seven-year budget up to 2020 would be set aside for climate spending.

This has not been matched across the board, with some countries now suggesting that they will not make commitments until 2016, a year after the world agreed to sign off the deal. Japan shocked participants last week in announcing that it would downgrade its current pledges from a 25% reduction on 1990 levels to an increase of 3.1%.

“We don’t like countries to backtrack from previous commitments,” said an EU spokesperson.