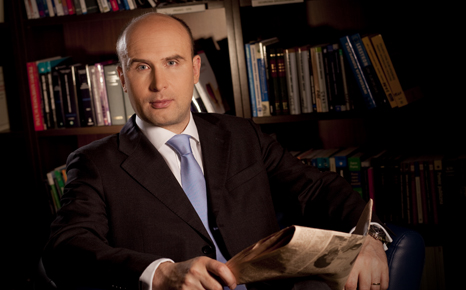 By Komila Nabiyeva in Warsaw

Korolec will keep his UN role for the remainder of the summit, but will be replaced by Maciej Grabowski, who has worked at the Ministry of Finance before.

According to reports in the Washington Post, the Environment ministry’s “foot-dragging on much-awaited regulations concerning exploration for shale gas and other fossil fuels” was behind the dismissal.

Polish climate campaigners lined up to criticise the appointment of Maciej Grabowski as the new Minister of Environment, after he highlighted the development of shale gas in Poland as his priority.

“This is nuts. Changing the Minister leading the climate negotiations after a race to the bottom by parties of the convention shows Prime Minister Tusk is not sincere about the need for an ambitious climate dea,” said Maciej Muskat, Director of Greenpeace Poland.

“Furthermore, justifying the change of the Minister by the need to push the exploitation of another fossil fuel in Poland is beyond words, especially in the light of the majority of Poles wanting to see increased investment in renewables – not fossil fuels.“

Julia Michalak, Policy Officer of Climate Action Network Europe added: “We are very dissapointed that during his first public statement the incoming Minister of Environment Grabowski was speaking about his plans to develop shale gas instead of tackling climate change and developing renewable energy.

“Prime Minister Tusk by making such a drastic change in the middle of the negotiations and ahead of the crucial decision  sends a signal that he is not committed to show leadership as a host country and achieve a meaningful agreement in Paris 2015.”

#COP19 gov reshuffle in PL changed my responsibilities. Will focus now on climate. Having more time for such a huge task was needed.

In a press conference, Korolec confirmed the news but said his commitment to the talks would remain unchanged.

“The decision to change my position will be enacted next Wedneday. Now I will be able to fully concentrate on climate negotiations. This will allow me to focus on this demanding process. We look forward to the success.”