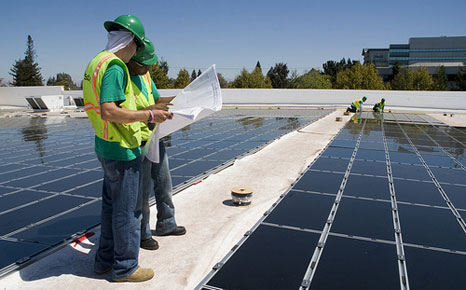 Walmart is being accused of ‘greenwashing’ and misleading consumers on the impact its stores have on the environment by a report from the Institute for Local Self-Reliance (ILSR).

Since 2005, Walmart’s reported greenhouse gas emissions have risen 14%, reaching 21 million metric tons per year according to the think tank ILSR.

In 2012, Walmart did report a modest 1.3% reduction in emissions, but this decline “was not exceptional”, said the report.

“If Walmart were included in the Greenhouse 100 Polluters Index,” the report said, “a list that is limited to heavy industrial firms, such as oil companies and power plants, the retailer would take the 33rd spot, just a hair behind Chevron, America’s second largest oil company.”

Walmart’s greenhouse gas emissions have risen over the last eight years, even as it orchestrated a steady stream of publicity boasting of its solar installations and efficiency measures.

A spokesman for Walmart said: “We achieved our commitment to reduce GHGs by 20% from our stores, clubs and distribution centers, avoiding 3 million metric tons of GHGs, or the equivalent of taking 625,000 cars off the road.

Author of the report and senior researcher with the ISLR Stacy Mitchell told RTCC that Walmart’s “agressive” sustainability PR campaign brought the retail giant to its attention.

“[Through] a series of announcements, photo ops, events where they are proclaiming themselves to be an environmental leader and putting out this image of sustainability, they’ve managed to convince many people that they really are green.

“We thought it was important to call them [out] on that and to really do the analysis to say this is a very unsustainable business model and they’re not even living up to their own promises.”

In response to the report, Walmart sent RTCC the following statement: “We’re working hard every day to find solutions to the most pressing sustainability issues. We have ambitious sustainability goals to improve our operations, increase fleet efficiency, source locally and sell more sustainable products.

“The results speak for themselves – we’re showing that we can grow our business while slowing our GHG emissions, improve the supply chain, make renewable energy more affordable and serve our customers for generations to come.”

In part of its corporate social responsibility campaign Walmart called itself a “leader in testing and scaling renewable energy projects in our stores”. According to its website this involves solar and micro-wind on parking lots, biodiesel generators and fuel cells.

“These locally generated power sources have the potential to meet up to 60% of a store’s energy needs”, says Walmart.

In April the company said it intends to produce or procure 7 billion kWh of renewable energy annually by 2020 – a six-fold increase over 2010 – and to decrease energy intensity used to power its buildings by an additional 20% by 2020.

“These two goals will take Walmart 3 times further, 10 years faster than the United Nations Sustainable Energy for All program’s goals.

ISLR’s report on the other hand says the company’s solar and wind projects provide only 4% of electricity to power its stores.

“Walmart’s sheer size means it uses enough renewable energy to land a place on the EPA’s list of top 20 retail users of green power, but almost all of the other retailers on this list derive a larger share of their energy from renewables.”

Some, like Kohl’s and Staples, get all of their electricity from renewable sources. Others, like McDonald’s (30%) and Starbucks (70%), are way ahead of Walmart.

In its 2013 Global Responsibility Report, the company explains that it was “unable to renegotiate an expiring contract [for renewable power] with competitive pricing.”

ISLR said: “Walmart is interested in shifting away from fossil fuels only if it can do so at little or no cost and without any impact on its profits.

“It’s not that Walmart can’t afford to do more; it just doesn’t want to. Walmart generated $16 billion in profit last year. The Walton family, which owns half of Walmart stock, is worth $145 billion”.

“We expect to increase the number of solar installations from just over 200 today to roughly 1,000 by 2020. 1.1 billion kWh of renewable energy provide power to our buildings today, enough to power over 95,000 US households.”

At UN climate change negotiations in Warsaw, the UN Global Compact released a report detailing the power the private sector has when it comes to influencing policy.

According to ISLR, Walmart spends considerable sums of money to influence the political process.

Mitchell said Walmart funding of climate deniers was the most “disheartening” part of the report.

“At the end of the day climate change is something that we’re going to have to address through public policy and we have been absolutely unsuccessful to take any legislative action.

“The fact that Walmart has been using its considerable sums of money that it spends on campaigns helping to elect people who are the obstacles on this issue is very disheartening and is a good indication of Walmart’s true colours,” said Stacy.

Since 2003, the company’s political action committee (PAC) has given over $22 million to federal and state candidates and political parties, making it one of the largest political donors in the country, according to the report.

Among the top recipients of Walmart’s financial support are many of the nation’s most powerful climate-change deniers.

Since 2005, Walmart’s PAC has given $35,000 to House Speaker John Boehner who said: “the idea that carbon dioxide is a carcinogen that is harmful to our environment is almost comical”.

Approximately $38,000 was given to House Majority Leader Eric Cantor who is reported to have said: “If there’s been any constant in human history, it’s been climate change. The real question is… the involvement of human causes”.

Senator Roy Blunt of Missouri, who received $30,000 and said: “there isn’t any real science to say we are altering the climate path of the earth”.

And finally, ISLR report that $29,500 was given to Senator John Boozman of Arkansas who said: “you can look back at some of the previous times when there was no industrialization, you had these different ages, ice ages, and things warming”.