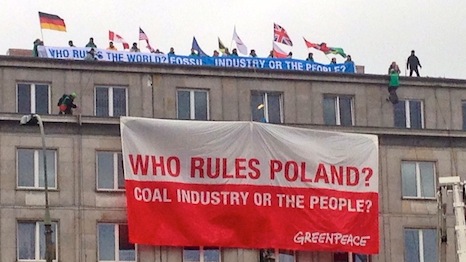 Most coal reserves must be left in the ground, UN climate chief Christiana Figueres told industry leaders today, if the world is to avoid dangerous climate change.

Speaking at the International Coal and Climate Summit, which is being held this week alongside UN negotiations to move towards a global climate change deal, Figueres said that the coal industry must undergo “rapid transformation” that will “go to the core of the coal industry”.

She said: “Many will say it simply cannot be done. But the phrase “where there’s a will, there’s a way” is tantamount to human history because will precedes innovation, and innovation precedes transformation.

“John F. Kennedy called for putting man on the moon in ten years at a point when no one knew how that would be done. We must transform coal with the same determination, the same perseverance, the same will.”

For the coal industry to meet the requirements of a 2C world—the “safe” limit for global warming, and the official target of the UN negotiations—she said that it must close all the most inefficient coal plants, implement carbon capture and storage (CCS) on all new plants, and leave most existing reserves in the ground.

Figueres’ appearance at the summit has caused her to clash with NGOs and activist groups, who asked her to boycott the summit, and have questioned Poland’s motivation for allowing a coal trade summit to take place alongside the UN climate talks. The event took place under heavy security, where even bottles of water were treated with suspicion by guards.

UK Minister for Climate Change Greg Barker said that the decision to hold the coal summit at the same time as the UN negotiations was “interesting” while Poland’s environment minister Marcin Korolec says opponents of the coal summit are “very strange, if not worrying”.

Figueres said that by joining the gathering, she was neither tacitly approving the use of coal, nor calling for its immediate disappearance.

Alden Meyer, director of strategy and policy at the Union of Concerned Scientists, called the summit a “distraction” from the aims of the UN conference currently underway in Warsaw’s National Stadium

“The summit’s focus on continued reliance on coal is directly counter to the goal of these climate negotiations, which is to dramatically reduce emissions of heat-trapping gases in order to avoid the worst impacts of climate change,” he said.

“Every year countries come together at these negotiations to find a global solution to climate change, and yet our host is embracing a chief cause of the problem.”

A future for coal?

Despite calls from Figueres to keep reserves in the ground, representatives from the coal industry speaking at the event stressed that coal was certainly not about to immediately disappear.

Milton Catelin, the head of the World Coal Association, said that the point of the summit is to “discuss ways which we can ensure the world retains the benefits of the world’s most abundant and affordable fuel, but reduce and eventually eliminate the costs of the release of CO2 emissions.”

Godfrey Gomwe, Chairman of Climate and Energy Committee at the World Coal Association, reinforced the point, adding: “As much as some may wish it, coal is not going away.

“Can we justify removing such a significant contributor to the fight against global poverty from the global energy mix? Most definitely not.”

He added that the “international community [should] become involved in supporting the deployment of high efficiency low emission technologies.”

Deputy prime minister Piechociński acknowledged that carbon capture and storage technology—a means of storing CO2 emissions and feted by many as the saviour of coal—is not yet commercially mature, but other methods such as gasification could help to secure a “low carbon” future for coal. He said that the development of one technology should not take precedence over any other.

A “Warsaw Communique” to be signed off at the summit calls for “immediate use of high-efficiency low-emissions coal combustion technologies”, and asks development banks to support developing countries in accessing clean coal technology.

But a joint statement released by leading climate and energy scientists today says that new, more efficient power plants—or “clean coal”—are not a solution to the world’s climate crisis.

Building new unabated coal plants will exacerbate the problem, say the 27 scientists who have signed the report, as it extends the lifespan of coal. Each plant is expected to operate for 40 to 50 years.

“The only way that coal plants can be part of a low carbon future is for all new coal plants to include CCS from the outset,” they write.

Speaking today at a press conference, Professor P.R. Shukla of the Indian Institute of Management, emphasised that the development of poverty stricken countries does not depend on the development of coal reserves, and that in 2012 US$ 112bn was invested in renewable technology.

“It is not true that opportunities for renewables in developing countries are not there,” he said, adding that assistance from developed countries could help to ensure that they are not locked into unabated coal use.

“We are not saying there is no future for coal but that unabated coal combustion is not compatible with staying below the 2°C limit, if we like it or not.”

Those attending the summit had to pass through activists crowded outside Poland’s Ministry of Economy, where the event is being held. From the roof, Greenpeace protesters had unfurled a poster, saying: “Who rules Poland? Coal industry or the people?” which was swiftly removed by Polish fire engines. But protests continued in spite of this hiccup, with medical students parading a giant pair of inflatable lungs to demonstrate the health risks of coal pollution.

A recent poll by Greenpeace shows that 73% of Poles would like Poland to be more involved in actions to prevent the negative effects of climate change, yet the country continues to generate 92% of its electricity from the polluting fossil fuel.

The protests did not go unnoticed by the speakers at the conference. Jerzy Buzek, member of the European Parliament and former prime minister of Poland, told industry members assembled that they should “not be too much influenced by any lobby”, referring to those on the roof of the building.

Janusz Piechociński, Deputy Prime Minister of Poland, said that another purpose of the summit was to correct the “irrational perspective of coal”.

Catelin said: “We want to move forward beyond the emotional rhetoric and I would say the stunts which have too much characterised this debate and focus on what we can all do on practical terms.”