US envoys told to block climate compensation plans at UN 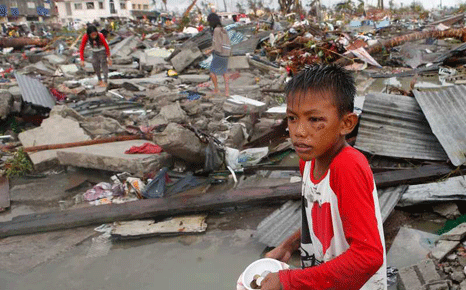 US envoys to the UN climate talks have been given strict instructions to block attempts to develop a climate compensation scheme say reports.

An internal briefing paper drafted by State Department figures and seen by The Hindu emphasises the US’ stiff opposition to a loss and damage mechanism, which has strong support from China, the G77 and small island states.

“It’s our sense that the longer countries look at issues like compensation and liability, the more they will realise this isn’t productive avenue for the UNFCCC to go down,” the leaked cable says.

“We are strongly in favour of creating an institutional arrangement on loss and damage that is under the Convention’s adaptation track, rather than creating a third stream of action that’s separate from mitigation and adaptation.”

The destruction caused in the Philippines by Typhoon Haiyan has pushed climate compensation up the agenda at the Warsaw talks.

Filipino negotiator Yeb Sano started a fast on Monday, which he says he will break only if he sees real progress at the talks. Over twenty NGOs inside the talks have also joined Sano.

The US document stresses the country’s fear that a loss and damage mechanism could lead to an atmosphere of “blame”, where “liability” becomes a potentially explosive issue.

“The US supports pragmatic approaches to address the substantive issues raised in loss and damage discussions and supports the establishment in Warsaw of a loss and damage ‘task force’ under the Adaptation committee of the UNFCCC,” it adds.

The US and other countries classed as ‘developed’ oppose basing financial and emission reduction obligations on what is known as “historical responsibility”.

They fear this could lead to huge claims of reparations from poorer nations, and would be politically impossible to present to domestic audiences.

Speaking on Monday, US deputy negotiator Trigg Talley told reporters the “current institutional infrastructure” was sufficient to cope with the issue, and help countries develop plans to minimise climate-related risks.

“We believe it is better to focus on cooperative issues rather than those on compensation, which frankly pose technical and political challenges to implement,” he said.

Earlier today WWF, Care and actionaid released a report calling for urgent action from governments on loss and damage.

The paper offers little sustenance to those expecting substantial funding pledges from Washington. Lead US envoy Todd Stern made it clear in a recent speech in London there was little appetite in Congress to boost contributions, a view backed up in this document.

“The US is doing all we can to make climate finance work on the ground,” it says, adding that  “finance is another contentious issue, with many developing countries feeling that there is lack of clarity on climate finance between now and 2020.”

US negotiators are also warned to stick to their party line on voluntary mitigation pledges for a 2015 climate change deal.

“We’re advocating an approach under which countries — both developed and developing — will put forth nationally determined mitigation commitments, followed by a transparent consultative process that will give other countries and civil society the opportunity to analyse and comment upon such commitments.”

This differs substantially to what the EU and other developing nation groups are asking for, which is a science-led process where pledges are reviewed to see if they are enough to avoid dangerous levels of warming.