Carbon market ‘toolbox’ – precursor to a global deal, or a waste of time? 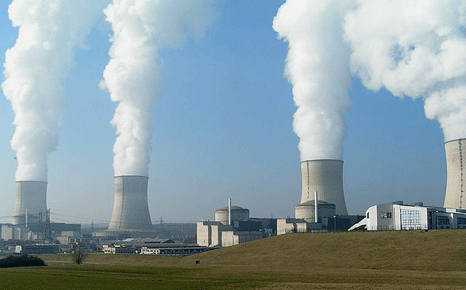 Later today, negotiators at the international climate negotiations in Warsaw will seek to establish a new set of guidelines for trading carbon permits – collectively called a global carbon market ‘toolbox’.

Although this could be seen as a precursor to a global carbon market, negotiators stress that prospect is still a long way off.

Countries meet annually to discuss climate goals as part of the United Nations Framework Convention on Climate Change (UNFCCC). Governments had previously agreed to commit to a new global deal by 2015 to reduce emissions. Negotiators are currently in Warsaw trying to lay the foundations of the deal.

The toolbox plans are being hailed by some as a sign of early progress at the meeting, but critics argue there are more pressing matters to attend to – such as clarifying the basic principles of how to share the emissions reduction burden between nations.

There are a variety of carbon markets popping up all over the world, the International Energy Agency says – and the number is increasing. The new ‘toolbox’ is an agreement that seeks to establish guidelines to help organisations standardise these currently disparate markets.

Each market has its own rules and ways of working, but they all share the same basic principle of allowing companies to trade permits to pollute – allowing the market to set a carbon price.

The theory is that this will create an economic incentive for companies to reduce their emissions, helping nations meet their climate goals while rewarding climate action.

The map below shows the current range of carbon pricing schemes: 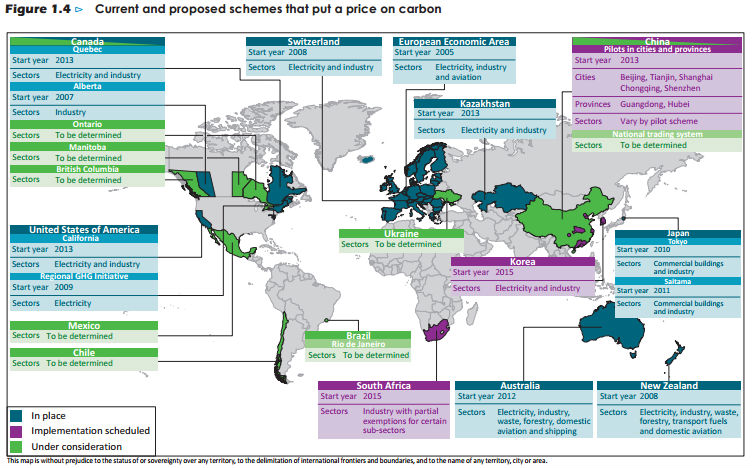 The EU emissions trading scheme remains the largest, but new carbon markets are emerging all around the world.

The Chinese city of Shenzhen started a pilot emissions trading scheme in June 2013, with several others expected to start in China soon, the IEA says. The United States currently has a regional scheme, and the IEA identifies Brazil, Mexico and Chile as all considering establishing carbon markets.

As it stands, all the markets have different criteria for what organisations can participate, how permits are allocated (or auctioned), and how emissions reductions are measured.

The toolbox would identify ‘best practice’ from existing schemes and recommend global standards, with a view to one day possibly establishing a global carbon market.

Not everyone is convinced the toolbox represents progress, however.

For instance, Filzmoser says it’s still unclear how tough the proposed standards will be.

The UNFCCC is expected to reveal a draft text of the toolbox plan this afternoon so more detail may be available soon – but its unlikely negotiators will be able to agree all the specifics.

Policymakers’ confidence in carbon markets as an emissions reduction mechanism is also eroding more generally – raising questions about the efficacy of the plan.

The EU’s carbon price has dropped to all time lows on a number of occasions this year, as reforms to bolster the scheme stalled in the European Parliament. Australia is also planning on scrapping its carbon pricing scheme.

Such problems indicate the “lower expectations” policymakers now have for carbon markets’ emissions reduction potential, the IEA says. So its unclear whether the toolbox will really help nations advance towards the two degrees goal.

Within the context of the wider negotiations, the toolbox discussions could arguably be seen as a something of a distraction.

The toolbox’s main proponents are countries that have previously been reluctant to commit to strong climate action: Poland and Japan.

Poland was at the forefront of a movement earlier this year to block EU carbon market reforms, while Japan is currently missing its emission reduction targets and is expected to shortly announce its intention to pursue weaker targets in any future deal.

Their endorsement of the toolbox may “raise some eyebrows”, Filzmoser says.

Negotiators will certainly be faced with trickier problems over the coming days – not least addressing the overarching dispute between developed and developing countries over how to share the burden of cutting global emissions.

But in a setting which traditionally only sees tangible progress made in the final hours, agreeing some of the carbon market toolbox’s details would be a rare note of early progress, of sorts.

This article first appeared on the Carbon Brief website.