Amazon destruction could cut US rainfall by 50%

Over 1.4 billion acres of dense forest make up the Amazon basin producing one quarter of the world’s oxygen supply 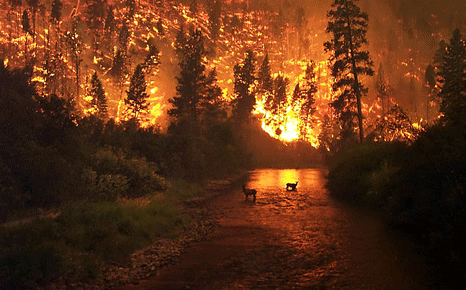 The total deforestation of the Amazon may reduce rain and snowfall in the western US, resulting in water and food shortages, and a greater risk of forest fires.

Princeton University-led researchers report that an Amazon stripped bare could mean 20% less rain for the coastal Northwest and a 50% reduction in the Sierra Nevada snowpack, a crucial source of water for cities and farms in California.

Over 1.4 billion acres of dense forest make up the Amazon basin that is one of the world’s natural major carbon sinks producing over one quarter of the world’s oxygen supply.

The rainforest influences various aspects of the surrounding climate, including cloud coverage, heat absorption and rainfall.

Author David Medvigy, an assistant professor of geosciences at Princeton, explained that the team’s findings stand as one possible outcome of Amazon deforestation in regions outside of South America.

“The big point is that Amazon deforestation will not only affect the Amazon — it will not be contained. It will hit the atmosphere and the atmosphere will carry those responses,” Medvigy said.

Using high-resolution climate simulations, the researchers are the first to find that the atmosphere’s normal weather-moving mechanics would create a ripple effect that would move dry air directly over the western United States from December to February.

The researchers found that the Amazon pattern would be subject to the same meandering high-altitude winds, known as Rossby waves, that distribute the Pacific Ocean temperature phenomenon known as El Niño.

“We don’t know what the world will be like without the Amazon. We know exactly what happens with El Niño — it’s been studied extensively,” Medvigy said.

“Our intention with this paper was to identify an analogy between El Niño and Amazon deforestation. There’s good reason to believe there will be strong climatic similarities between the two. Research like this will give us a handle on what to expect from Amazon deforestation.”

Deforestation across the Amazon rainforest has increased by more than a third over the past year.

Research has shown that climate change, especially a spike in the global temperature, could wipe out as much as 85% of the forest.

Deforestation and other key environmental issues will be under the spotlight this week as the United Nations Climate Change Conference negotiations taking place in Warsaw, Poland.

The Amazon’s fragility and vulnerability — combined with its outsized sway over the climate — add an urgency to better understanding how the forest’s disappearance will affect the larger climate, particularly for agriculturally important areas such as California, Medvigy said.

“We know the Amazon is being deforested, but we don’t know for sure what’s going to happen because of it,” Medvigy said. “Other scientists need to do these simulations and see if they get the same results. If they do, then policymakers will have to take notice.”