UN climate deal must be “tailored” to fit USA and China

Kyoto failed because it didn’t get backing of top emitters US and China, so negotiators know a new treaty will have to bring both on board 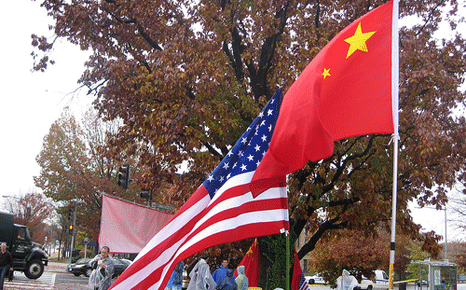 Sixteen years ago in 1997, 192 countries signed an agreement to cut their greenhouse gas emissions, but the Kyoto Protocol was hamstrung from the start, because it failed to get the backing of the world’s current top emitters: the US and China.

The Kyoto Protocol expires in 2020, and the latest round of negotiations to replace it kicks off in Warsaw today.

It’s clear that this time round the negotiations will need to be tailored towards the demands of the US and China if a deal is to be struck.

Former lead climate negotiator for the Netherlands Maas Groote told news website Responding to Climate Change: “… without [the US and China] you will not have an effective instrument on your hands … So you have to tailor an instrument that will fit their political context … At the end of the day you want an agreement, some kind of an outcome, that China and the US can embrace”.

The United States’ failure to commit to the Kyoto Protocol has been a source of tension in the international negotiations for over a decade. While President Obama has indicated that he wants the US to re-engage with the process – a stance he backed up by attending the 2009 negotiations in person – eight years of obstruction by the George W. Bush administration made participants wary of US motives.

China has been the most notable critic, arguing that it can’t be expected to commit to emissions reductions until the US shows it is willing to lead.

One of the main sticking points between the two countries is how much responsibility more and less economically developed countries take for cutting emissions.

Hæge Fjellheim, Senior Analyst at consultancy Thomson Reuters Point Carbon, says finding a way to bridge “the crucial divide” between the more and less wealthy nations will need to be at the centre of the Warsaw agenda, if there is to be any progress towards a new deal.

China has indicated it will accept some emissions curbs, but thinks the traditional economic powerhouses that have historically been responsible for more emissions – including the US – should take the lead.

The US isn’t happy with this, arguing that China is now economically developed enough to take responsibility for its emissions.

China is currently not considered an Annex I country, however – a source of chagrin for the US negotiators, who see China as shirking their international obligations.

The US’ special envoy to the negotiations, Todd Stern, told a meeting at Chatham House last week that the US would only accept a new deal if it was “applicable to all”, including China.

China maintains that the Annex I countries are yet to meet their own commitments, however. Some countries, including Japan and Australia, look set to miss their Kyoto Protocol emissions reduction targets, and some, like Canada, have abandoned the treaty altogether.

China is also unimpressed that a fund setup in 2009 to transfer resources from developed to developing economies remains empty.

Fjellheim tells us that resolving the financing issue will be vital to getting China to agree to any new deal.

China has shown some willingness to engage with the question of reducing emissions. It has implemented a regional emissions trading scheme in recent months, which the government plans to roll out across the country.

While it’s emissions continue to grow rapidly, China is sure to point towards such policies when countries with more established economies – and much higher per-person emissions – argue that it is neglecting to take action.

The fact that China is willing to engage with the issue at all is a significant “background shift”, argues Matthew Paterson, a Political Studies professor at the University of Ottawa.

He says it “changes the dynamic between industrialised and developing countries”, as China can no longer be accused of being the laggard it once was.

He argues this could put more pressure on economically developed countries – including the US – to show their commitment to climate change mitigation in the negotiations.

Countries will also have to contend with the US and China’s particular domestic political systems – with knock on effects for the design of any new deal.

President Obama and US Secretary of State John Kerry have said they are committed to getting a new deal with strong emissions reduction targets, but it will have to take a different form to the Kyoto Protocol.

The US constitution requires any international treaty to be ratified by Congress, which refused to agree to the Kyoto Protocol in 1997, despite President Clinton signing up.

Climate change is a divisive issue in Congress at the best of times – and if any new deal is officially a treaty, Obama is unlikely to get it passed by a currently partisan and dysfunctional Congress.

As such, countries may have to agree to a new type of system to get around that obstacle. One solution put forward by the US is a more flexible “nationally determined structure”, where countries set their own targets.

Other governments and NGOs would then be invited to critique the targets before they are set in stone.

US envoy Stern argues that this would allow countries to only commit to emissions reductions they genuinely believe they can achieve, and give them the opportunity to demonstrate they “understand that all have to do their part”.

In theory, such a system could be administered without the need for a new treaty, meaning the President could bypass Congress.

The US’ plan could be easily jettisoned by governments’ lack of ambition, however. China has a reputation for just such intransigence when it comes to accepting firm international commitments.

This isn’t just because it doesn’t want to take a share of the emissions reduction burden. The way China’s domestic politics works means its envoys go to the negotiations with very little wiggle room.

A committee of politicians set China’s goals before the negotiations start, and the envoys are effectively sent to communicate that position to the rest of the world – making compromise difficult.

Kerry has been taking every opportunity to meet with Chinese delegations, so will be well aware of China’s intentions.

Groote’s experience of the negotiations suggests this is good news. He says the opportunity to hammer out positions in advance increases the chances of getting a deal.

If progress is going to be made, It looks like countries are going to have to be prepared to follow the US and China’s lead.

Groote says it’s time for other countries to compromise, and recognise that accepting the US and China’s proposals is “the only way forward to conclude an effective, successful deal.”

Reuters analyst Fjellheim agrees. She says for any new deal to be successful, “China and the US will have to be on board”.

That’s a position likely to be shared by the majority of delegates at the meeting, and will shape the negotiations over the coming fortnight.

This article first appeared on the Carbon Brief.