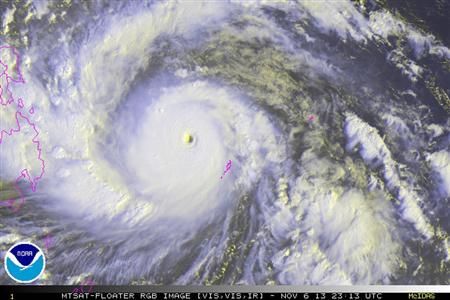 Typhoon Haiyan would have stretched from Warsaw to Paris, hosts of the 2015 climate summit, if placed over Europe (Pic: NOAA)

And with good reason. The Philippines’ lead negotiator at the 2013 UN climate change summit spent much of Friday and Saturday wondering if his family had survived Typhoon Haiyan, one of the deadliest storms ever to hit the country.

He was awake most of Saturday night as the news filtered through to his hotel room in Warsaw. 10,000 people had died in the east coast city of Tacloban, with thousands more unaccounted for.

“The first message I got from my brother was short, to say he was alive,” he says. “The second was that he had been burying dead friends, relatives and strangers. He said with his own two hands he had piled up close to 40 dead people.”

Sano’s family hails from the part of the Philippines eastern seaboard where the typhoon made landfall, smashing into his father’s hometown.

“I really fear that a lot of my relatives may have suffered tremendously, if they survived at all,” he adds.

No information has filtered through about the many island communities on the east coast, but the omens are not good. Even those who made it to Typhoon shelters on the mainland became casualties, says Sano.

“What we have been gathering from the ground is that even those who were brought to safer ground were casualties in the end, because the evacuation centres did not manage to hold up to the force of the storm,” he says.

In all, 36 provinces, around two-thirds of the country, were affected as the storm crossed the country en route for Vietnam. Sano says there is still no word on  the 1.5 million people in the province around Tacloban.

The towns affected by Haiyan are the “poorest of the poor” says Sano. The government did issue warnings, but many households do not have radios, and it’s unclear how much information filtered down.

Those that survived in all likelihood have lost everything they ever owned. He says the fishing and farming communities affected live in lightly constructed buildings, relying on the land and sea for survival.

Sano’s anger and frustration is all the more acute given the role he has played as a climate change envoy in the past years.

He made headlines at last year’s summit in Doha with a powerful speech in the main plenary, days after a Typhoon named Bopha had lashed through the island of Mindanao, killing over 1,100.

“We have not seen any money from the rich countries to help us to adapt … We cannot go on like this. It cannot be a way of life that we end up running always from storms,” he says.

Sano acknowledges it is currently hard to attribute single events to climate change. IPCC climate scientists currently have ‘low confidence’ that the intensity of tropical cyclones has increased since the 1950s, although they believe it is ‘likely’ they will increase in the late 21st century.

Instead, he points to Bopha and Haiyan as a warning of what is to come for coastal communities in South Asia.

“The physics is quite simple, that if you have warming oceans it will generate storms, especially intense storms,” he says.

“Climate change means we face a future where super typhoons will no longer be one-in-one hundred year events… and we refuse to accept a process that will allow a future where Super Typhoons would happen every year, and that’s what happening.”

The winds of change move at a slower pace at the UN. In 2011 countries agreed to work towards a global deal to be signed in 2015, and implemented in 2020.

Huge questions remain over the levels of financial aid and levels of greenhouse gas cuts to which nations – particularly richer states – are willing to commit.

Sano says initial talks in Warsaw have left him with a sense of déjà vu, but he insists he will not leave without “concrete pledges on finance” and a commitment on support for countries who need to adapt to changing weather patterns.

Specifically, he wants clarification on the future of the UN’s Green Climate Fund and the sources of the $100 billion a year by 2020 promised by rich countries.

A report published by Oxfam today underlines why this is such a critical issue. It estimates that between US$7.6bn and US$16.3bn of climate finance has been set aside by developed countries for 2013. Only the UK has offered support until 2015.

The next two weeks promise to be tough for the Philippines delegation. Sano says their usual complement of 45 is likely to be lower, as many negotiators have stayed at home to help with the relief efforts.

Those that are in Warsaw are in “shock”. Many want to return home.

“Some of us remain uncertain over the plight of our relatives. The main feeling is hard to describe. This is an unprecedented experience for all of us. It’s hard to find the words,” he says.

Support has come from unlikely sources. Hotel owners and people in the street in the Polish capital have stopped him to pass on their best wishes. Diplomats from rich and poor countries have offered assistance.

Sano says he is under no illusions that one storm will change what has become a set of convoluted, tough and often bitter negotiations.

The death toll at home is likely to rise, while the economic costs will eclipse Bopha’s US$ 750 million price tag – but Sano believes Haiyan will drive his battered team forward over the next fortnight.

“What we have always told our countrymen is always have faith in the Philippine delegation at the climate change convention, because we will continue fighting for the interests of our country and will always be steadfast in ensuring we fight for the future of the Filipino people,” he says.

“My more important message to them is to stand strong in the midst of this tragedy, and we will rise again, as we have always done.”