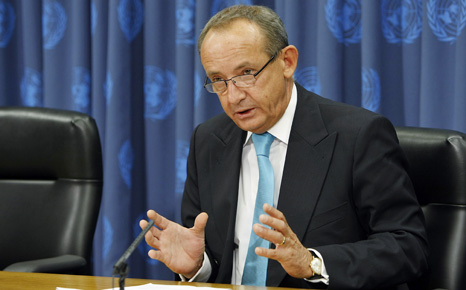 By Adam Vaughan, the Guardian

Australia should be sending a minister to international climate negotiations starting next week, the UN’s former climate chief has told the Guardian following the revelation that the Abbott administration will not be sending its environment minister to the talks.

The remarks by Yvo de Boer, who stood down as executive secretary of the UN Framework Convention on Climate Change standing down in 2010 to take up a position at KPMG, come as the UK’s former top climate diplomat called the move by Australia “puzzling.”

Justin Lee, a diplomat and Australia’s ambassador for climate change, will instead represent Australia, marking the first time the country has not sent a government minister in 16 years. The UK is sending energy and climate secretary, Ed Davey, and more than 50 officials from government.

De Boer, who famously cried in frustration at progress of the talks in Bali in 2007, said: “I think it would’ve been really good to have had Australia represented at the talks [at ministerial level].” Such political representation was crucial to make breakthroughs at the complex and long-running negotiations, he said.

He added: “I cannot remember a previous occasion when a major player in this process has not been represented at ministerial level at the high level segment of the talks.”

But he said that he had recently met the environment minister, Greg Hunt, and was convinced he was committed to tackling climate change, despite advocating a different approach to the Labor party. “He is very committed to this issue, he understands it, he understands the implications for Australia, he wants Australia to be part of the solution, but he’s not very excited about the pill box that the previous government created to do that.”

De Boer said that while talks in Warsaw were not expected to produce any huge achievements, they were an important stepping stone towards 2015, when countries have agreed to produce a deal on tackling climate change that comes into effect by 2020. “No major breakthroughs are expected at this conference but it is an opportunity to provide political guidance on the roadmap for [a deal] at Paris in 2015.”

The UK’s former top climate diplomat at the foreign office, John Ashton, told the Guardian that the decision by Australia was puzzling. “We are now in the phase of building momentum [towards a climate deal in Paris]. We are now in a critical two years, we won’t get another bite of the cherry.” Against that backdrop, he said that “for a major player not to send an elected representative is a pretty puzzling decision”.

He added: “If people draw the conclusion that that this is a country that would rather stick to a business a usual approach rather than building a low-carbon growth model compatible with [temperature rises of] 2C, no one should be surprised.”

Agreeing a strong deal in Paris would require more clarity from world leaders soon, de Boer said, citing such a lack of agreement as one of the reasons talks in Copenhagen floundered in 2009.

“What is supposed to be agreed in 2015 is still an open question. We left Bali on the road to Copenhagen with a lack of clarity and that lack of clarity didn’t make negotiations on the end result [in Copenhagen in 2009] any easier,” he said.

UN secretary-general Ban Ki-moon has invited heads of state to meet next year to lay the groundwork for a 2015 deal, for the first time since they met in Copenhagen. “You need heads of state guidance, and the earlier you get that, the better,” said de Boer.

This article first appeared on the Guardian