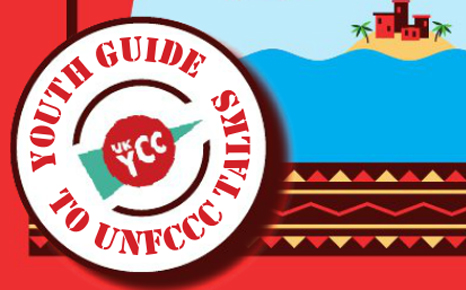 By Louisa Casson and Jamie Peters

So to guide you through this challenging but vital process, the UK Youth Climate Coalition (UKYCC) have dissected the jargon so you can understand what on earth is going on.

If there are any other terms you want deciphered, leave a note at the bottom of the page and we’ll ask Louisa and Jamie to have a look.

ADP – This is the second COP to convene the Ad Hoc Working Group on the Durban Platform for Enhanced Action. The Durban Platform for short has discussions split between two main areas: Workstream 1 (WS1) focusing on a 2015 global climate deal and Workstream 2 (WS2) negotiating pre-2020 action to close the ‘emissions gap’ between promised action and the need to avoid tipping points.

Bottom-up vs top-down – As 2015 and the deadline for a global deal gets closer, debate around the architecture of the deal are heating up between proposals for a ‘bottom-up’ approach of countries making their own non-binding voluntary targets to reduce carbon emissions (currently being promoted by the USA) and a more ‘top-down’ method where a common global goal for reducing emissions will be agreed and then divided fairly between nations.

CBDR-RC – Common but Differentiated Responsibilities is a fundamental principle of the Convention, meaning all countries must contribute to reducing greenhouse gas emissions but recognising that industrialised and developed states can be expected to do more due to their historical responsibility for greater emissions – and their Respective Capabilities which put them in a better place to cut their emissions and help developing countries to adapt.

Divestment – Civil society campaigns to get institutions such as universities and local authorities to divest their money from fossil fuels are gaining momentum, particularly in North America and Europe. The impact this has on the UNFCCC process will be interesting, showing alternatives venues for change.

Equity – Discussions around equity have become a key part of the negotiations for a global climate deal. Equity is about each nation feeling they are taking actions that are appropriate to their responsibilities for emissions reductions, and so interpretations of CBDR-RC are key in these discussions. There are fears that theoretical discussions around equity may be used to delay progress in the talks, and the focus is now shifting to how countries can use these discussions to speed up climate action on a fair basis. Youth are also calling for intergenerational equity to be recognised in the talks.

Finance –  Hailed as a ‘finance COP’, the Polish presidency are hoping to reach a common understanding of climate finance in Warsaw. This means the Annex II countries who are responsible for providing climate finance clarifying what money will count as climate finance, dedicated towards mitigation and adaptation projects in developing countries. Disagreement focuses on how much climate finance should come from ‘new and additional’ sources of money, rather than existing development aid, as part of rich countries’ 2010 pledge to provide poor nations with $100bn each year by 2020 via the Green Climate Fund.

GHGs – The increase of man-made greenhouse gases in the atmosphere like carbon dioxide and methane cause the heating up of the planet. Global temperature rise causes a number of climate change impacts, such as melting of the polar ice caps, sea level rise and desertification.

HFCs – In June, despite a lack of progress at the UN’s intersessional meeting in Bonn, a deal between China and America was struck outside the UNFCCC talks to phase out hydrofluorocarbons – which some scientists predicted could be responsible for at least 20% of global atmospheric warming by 2050 if action was not taken to limit them.

IPCC AR5 – The Intergovernmental Panel on Climate Change is currently releasing its 5th Report (AR5), with the results of the first working group published in September. The next parts of the report will be released in March, April and October 2014. The most authoritative scientific assessments on climate change, which have been agreed unanimously by the world’s governments, ends the debate over whether climate change is happening due to human activity and shifts the question to what governments should do to address the growing crisis and prevent catastrophic warming. The report makes clear that a rapid reduction of greenhouse pollution will help the world avert the worst of climate change, but without swift and significant strategies to reduce our carbon emissions, global temperatures by the end of the century are likely to exceed the 2 degree limit agreed by world leaders.

Kyoto Protocol (KP) – The Kyoto Protocol remains the only legally-binding agreement to reduce greenhouse gas emissions achieved by the UNFCCC. It covers most of the countries considered to be developed or industrialised in 1992, known as ‘Annex I’ countries. 2013 is the first year of its second commitment period (CP2), to which the USA, Canada, Russia, New Zealand and Japan did not sign up.

Loss and Damage – After emerging as a controversial subject at last year’s conference in Doha, a package for the provision of compensation for climate change impacts is on the agenda for Warsaw. Controversy arises from the difficulty in attributing impacts directly to climate change and the lack of action on climate finance in general. A blocked agenda at the June meeting in Bonn has prevented discussion on this topic in 2013 – and it could be a messy set of talks in November.

Majuro Declaration – In September 2013, Pacific leaders signed the Majuro Declaration for Climate Leadership to call on the international community to step up its climate ambition. The declaration was agreed at a meeting in Majuro, capital of the Marshall Islands, which was submerged in flooding in June. The US, EU, Indonesia, South Korea, Thailand and Malaysia subsequently joined Pacific Island Forum members to express support for the declaration.

NAPAs – National Adaptation Programmes of Action are plans to support the Least Developed Countries adapt to the impacts of climate change. They look at current grassroots actions and build on them to produce regional and national policies.

Observers – Delegates involved in the UNFCCC who do not represent countries but are permitted to attend UN meetings, receive updates and support from the Secretariat, and make submissions in the UN meetings. They include intergovernmental organisations (IGOs) like UNEP and the IPCC, and the constituencies of environmental NGOs, business representatives, trade unions, youth and indigenous people.

Pathway to Peru and Paris – The next COPs to prepare and sign the global climate deal will be in Lima, Peru in 2014 (with a pre-COP promised to radically shake up the talks with greater civil society involvement in Caracas, Venezuela beforehand) and Paris, France in 2015. The Polish presidency of COP19 has said that establishing a pathway to the Paris deal is its priority for this year’s conference.

QELROs – Quantified Emission Limitation and Reduction Objectives are the pledges made by Annex B countries under the Kyoto Protocol to reduce their greenhouse gas emissions. At COP18 in Doha, Australia’s QELRO to reduce its emissions by 0.5% by 2020 compared to 1990 levels was ridiculed by civil society.

Russia – After the Russian delegation was prevented from raising an objection and was gavelled over as the Qatari presidency brought last year’s conference to an end after overunning in discussions on the second commitment period of the Kyoto Protocol, Russia blocked progress in the June intersessional meeting in Bonn, where an agenda could not be agreed for the Subsidiary Body for Implementation (SBI) talks.

Subsidies – Raised by Connie Hedegaard last year, the push to phase out Fossil Fuel Subsidies (FFS) as a way of freeing up funds for investment into clean energy and developed country finance pledges is being discussed as part of the ADP negotiations.

Taxes – In order to make up the climate finance pledges that rich countries have committed to, innovative forms of finance are discussed at the UN climate talks. The Financial Transaction Tax (also known as the Robin Hood Tax) and taxes on bunker fuels covering international shipping and aviation are seen as practical and progressive ways to raise new and additional revenue for climate finance.

UNFCCC – The United Nations Framework Convention on Climate Change was agreed in 1992, and its Secretariat have been holding Conferences of the Parties since 1995 for the 195 countries that have ratified this international treaty. The Convention was established with the aim of stabilising greenhouse gas concentrations “at a level that would prevent dangerous anthropogenic (human induced) interference with the climate system.”

Verifiable – The USA has suggested that all mitigation targets made by countries to reduce their greenhouse gas emissions should be checked independently to see if they are Measurable, Reportable and Verifiable (MRV). Other countries including China have resisted this interference with their way of accounting for emissions.

Warsaw – Warsaw in Poland is hosting the 19th Conference of the Parties (COP19) on behalf of the Eastern European Group from 11-22 November. The President for the summit will be the Polish environment minister Marcin Korolec. Doubts have been raised over Poland’s climate ambition following vetoes to EU climate action and the country’s dependence on coal as a power source.

YOUNGO – The constituency of youth NGOs was established in 2009 to give young people a voice in the talks. YOUNGO is the only constituency within the UNFCCC that has permission to perform creative actions within the conference centre, and youth climate campaigners also interact with policy-makers through policy submissions and speeches (called interventions) to negotiators in plenary meetings. YOUNGO members organise a Youth and Future Generations day at every COP as a reminder of the moral impetus for governments to take urgent and ambitious climate action, and have put on a 3-day Conference of Youth directly preceding the COP since 2005 to organise and skill-up the international youth climate movement (IYCM).

2015 deal – While finance may dominate this year’s summit, progress on the global climate deal is eagerly awaited by civil society. In Durban at COP17 it was agreed that a global climate treaty with legal force would be agreed in 2015 and come into effect in 2020. Questions that need answers surround the architecture of the deal (see B for bottom-up vs top-down) and how discussions around equity will be accommodated into the deal.

About UKYCC:
The UK Youth Climate Coalition is run entirely by a team of highly motivated young volunteers, all of which are between the ages of 18 -29, working together between other commitments to create a future which is happy, affordable, clean and safe. ‘Every year we train up and send a UK Youth Delegation to the United Nations Climate Change Talks We collaborate with other international youth organisations and call for immediate international climate action that is fair and protects the world’s most vulnerable.