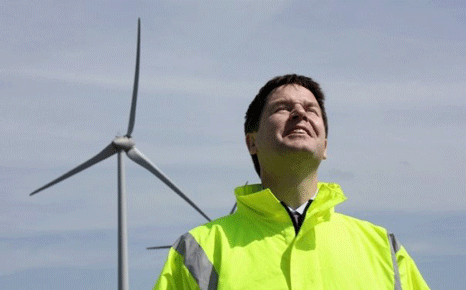 “And yet all of us sat to hear Sir Mark Walport, the Government’s Chief Scientific Advisor, when he came last month and explained to the Government that the recent IPCC report – which made clear the  threats posed by man-made climate change – was the most exhaustive, authoritative, peer reviewed report on climate change ever published,” Clegg said.

“How much more hard science is needed to convince the climate change deniers they’ve got it wrong?

Chancellor George Osborne and Environment Secretary Owen Paterson are both thought to be hostile to the UK’s carbon reduction measures.

Paterson told the Conservative party conference warming could be a good thing, adding that he thought adapting to temperature increases of one to two and a half degrees would not be a problem.

Clegg also said the green agenda will be a priority for his party in the 2015 General Election, promising that the Liberal Democrats’ commitment to the green agenda is “as strong as it ever was”.

“Conventional wisdom tells us that the environment must now go on the backburner while we prioritise our economic recovery – but I believe the opposite is true. If there was ever a time to sharpen our focus on our green commitments, it’s now.

“There is a perfect symmetry between the nature of our economic recovery and our environmental responsibilities.”

Clegg added that the UK’s economy has now “turned a corner”, saying that the government needs to make sure the country maintains “pole position” in the low carbon sector.

“China, India, America, Germany, Brazil – the race is on with our competitors for green global investment. It would be a huge mistake to take our foot off the pedal now: economic myopia of the worst kind.”