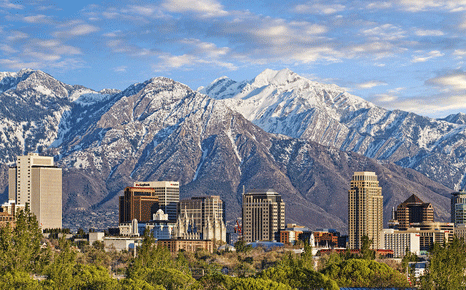 Every fahrenheit of warming in the Salt Lake City region would mean a significant drop in the annual flow of streams that provide water to the city, shows new research.

While the impacts of a temperature increase would vary among the region’s basins, the stream flow would decline by 1.8 to 6.5% for each degree of temperature rise, with an average reduction of 3.8%.

By midcentury, warming western temperatures may mean that some of the creeks and streams that Salt Lake City relies on will dry up several weeks earlier in the summer and autumn, according to the detailed analysis of the city’s water supply.

“Many western water suppliers are aware that climate change will have impacts, but they don’t have detailed information that can help them plan for the future,” said lead author Tim Bardsley of the Cooperative Institute for Research in Environmental Sciences (CIRES).

“Because our research team included hydrologists, climate scientists, and water utility experts, we could dig into the issues that mattered most to the operators responsible for making sure clean water flows through taps and sprinklers without interruption.”

The analysis, compiled by the National Oceanic and Atmospheric Administration (NOAA) and experts from the Salt Lake City Department of Public Utilities and the University of Utah, said the findings could help regional planners make choices about long-term investments, including water storage and land-protection policies.

An international group of researchers are demanding a more concerted effort to integrate social and climate science, engineering, and other disciplines to better prepare for the impacts of climate change.

Senior scientist Richard Moss of the US Department of Energy’s Pacific Northwest National Laboratory, part of the JGCR said: “Adapting to an evolving climate is going to be required in every sector of society, in every region of the globe. We need to get going, to provide integrated science if we are going to meet the challenge.

“In this article, we describe the foundations for this research and suggest measures to establish it.”

The focus on problem-solving could open up new sources of funding as well, sources such as NGOs, industry – any group with specific problems that adaptation science could solve.

Mammals shrank significantly during at least two ancient global warming events, according to palaeontologists from the University of Michigan, suggesting something similar could happen in response to current climate change.

Researchers have known for years that mammals such as primates and the groups that include horses and deer became much smaller during a period of warming, called the Paleocene-Eocene Thermal Maximum (PETM), about 55 million years ago.

Now palaeontologist Philip Gingerich and his colleagues have found evidence that mammalian “dwarfing” also occurred during a separate, smaller global warming event that occurred about 2 million years after the PETM, around 53 million years ago.

“The fact that it happened twice significantly increases our confidence that we’re seeing cause and effect, that one interesting response to global warming in the past was a substantial decrease in body size in mammalian species,” said Gingerich, a professor of earth and environmental sciences.

They concluded that decreased body size “seems to be a common evolutionary response” by mammals to extreme global warming events, known as hyperthermals, “and thus may be a predictable natural response for some lineages to future global warming.”

For the first time, a NASA airborne campaign will measure changes in the height of the Greenland Ice Sheet and surrounding Arctic sea ice produced by a single season of summer melt.

NASA’s C-130 research aircraft will conduct survey flights to collect data that will improve our understanding of seasonal melt and provide baseline measurements for future satellite missions. Flights are scheduled to continue through 16 November.

A second mission, ICESat-2 will take place in 2016 in order to compare the data from different times of the year.

Warm summer temperatures lead to a decline in ice sheet elevation that often can be significant in low-lying areas along the Greenland coast.

In past years, the Jakobshavn Glacier, located in the lower elevations of western Greenland, has experienced declines of nearly 100 feet in elevation over a single summer.

“Surface melt is more than half of the story for Greenland’s mass loss,” said Ben Smith, senior physicist at the University of Washington’s Advanced Physics Laboratory, Seattle, and member of the science team that selected flight lines for this campaign.

The rest of Greenland’s mass loss comes from ice flowing downhill into the ocean, often breaking off to form icebergs, and from melting at the base of the ice sheet.

Carbon capture and storage projects injecting CO2 underground led to a series of small earthquakes near Snyder, Texas, between 2006 and 2011, according to a new study.

The study also points out that similar rates of injections have not triggered earthquakes of the same magnitude or at all in other fields.

“What’s interesting is we have an example in Cogdell field [of an earthquake], but there are other fields nearby that have experienced similar CO2 flooding without triggering earthquakes,” said Cliff Frohlich, associate director of the Institute for Geophysics. “So the question is: Why does it happen in one area and not others?”

He suggests one possible explanation for the different response to gas injection in the three fields might be that there are geological faults in the Cogdell area that are primed and ready to move when pressures from large volumes of gas reduce friction on these faults. The other two fields might not have such faults.