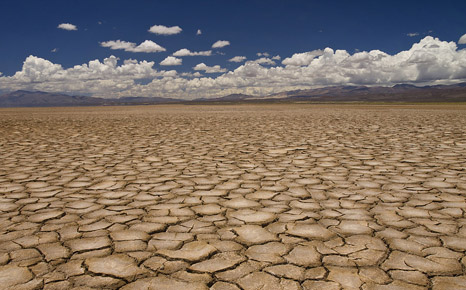 A warmer, drier world will be bad news for those people who already live on the edge. Higher temperatures will do more than evaporate the soil moisture: they will alter the natural soil chemistry as well.

Manuel Delgado-Baquerizo of the Universidad Pablo de Olavide, in Seville, Spain, and fellow scientists report in Nature that they looked  at soil samples from 224 dryland ecosystem plots in every continent except Antarctica.

Drylands matter: they account for more than 40% of the planet’s land surface and they support more than 38% of its population. Drylands add up, in the dusty language of science, to the largest “terrestrial biome” of all.

And even though on average more warmth will mean more evaporation, and therefore more water vapour in the atmosphere and more precipitation in some of those zones that already have ample rainfall, the pattern could be different in the arid lands.

All the calculations so far indicate that these drylands will increase in area, and become drier with time. Already 250 million people are trying to scrape an increasingly meagre living from lands which are degrading swiftly, either because they are turning to desert, or because they are overgrazed.

But to make things worse, climate scientists predict that between 2080 and 2099, soil moisture will decrease by between 5% and 15% worldwide. And that in turn could have a profound effect on the levels of carbon and nitrogen nutrients naturally in the topsoils.

What keeps soils alive, and productive, is the compost or humus of leaf litter, animal dung, withered roots and other decaying vegetation in the first metre or so of topsoil: this in turn feeds an invisible army of tiny creatures that recycle the nutrient elements for the next generation of plant life.

But these microbes also need water to thrive. The consortium of researchers predicted that as the soils got drier, biological activity would decrease, but geochemical processes would accelerate.

That is, nutrients that depended on little living things in the soil would drain away, but other elements – phosphorus among them – would increase, because they would be winnowed from the rock by mechanical weathering or erosion.

The research team tested this argument with samples from 16 countries, including the Negev desert in Israel, the woodlands of New South Wales in Australia, the Altiplano of Peru, and the Pampas lowlands of Argentina.

These regions could all expect from 100mm of rainfall a year to 800 mm; all soil samples were analysed in the same laboratory in Spain.

And as predicted, they revealed an increasing imbalance: more phosphorus, less carbon and nitrogen as they became drier. Such a trend would actually feed back into global warming: ideally, more vigorous plant growth would absorb more carbon dioxide.

But if vegetation wilts, and soils turn to dust over large areas of already parched land, then the carbon dioxide levels in the atmosphere will increase even more.

“Plants need all of these elements, in the correct amounts, and at the right times, but increasing aridity will upset this balance, leading to a breakdown in essential soil processes,” said David Etheridge, of the University of New South Wales, one of the authors.

“As the world’s population grows, people will increasingly rely on marginal lands – particularly drylands – for production of food, wood and biofuels. But these ecosystems will be severely affected by imbalances in the cycle of carbon, nitrogen and phosphorus.”