The Ashegoda 120MW wind farm near the capital will supply enough energy to over 100,000 homes 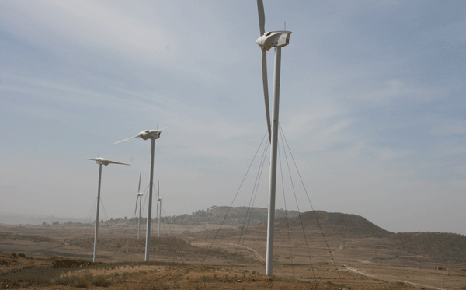 Costing €210 million, the Ashegoda Wind farm took four years to complete and will generate 120MW, enough to supply energy for over 100,000 homes.

Speaking at the opening ceremony, Prime Minister Hailemariam Desalegn said the wind farm was vital to maintain the country’s development.

“Various studies have proved that there is potential to harness abundant wind energy resources in every region of Ethiopia. We cannot maintain growth without utilising the energy sector,” he said.

Ethiopia is pushing its renewable energy sector to make use of the 20,000 square kilometres suitable for wind electricity generation.

With African economies becoming more stable and therefore more attractive to foreign investment, this farm could open up doors to further projects.

“I think there’s certainly an opportunity for wind to play a major role in the power sector in that whole area from Cape Town to Addis Ababa and beyond up in the east if political situations calm down in places like Djibouti and Eritrea and most importantly Egypt.”

Last week, Ethiopia signed a preliminary agreement with a US-Icelandic firm for a $4 billion private sector investment intended to tap its vast geothermal power resources and produce 1,000MW from steam.

Sawyer said: “Quietly, the economies in Ethiopia, Kenya and Tanzania have been growing 5-8% for the last six to eight years.

“We’ve had peaceful transitional governments in Ethiopia and the latest transition in Kenya didn’t spark a civil war. Tanzania seems to be politically stable and so there’s a lot of people interested in investing in that part of that world.

“In Ethiopia there’s lots of hydro potential and wind and hydro are very complimentary. And they’re both very low priced and competitive.”

Ethiopia’s hydropower potential has been estimated to be around 45,000MW and geothermal at 5,000MW, while its wind power potential is believed to be Africa’s third-largest behind Egypt and Morocco.