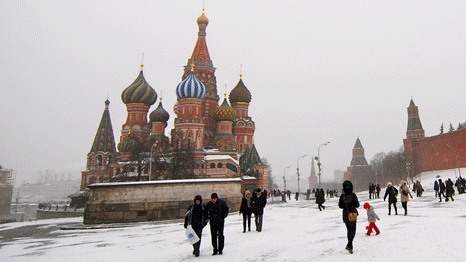 The arrest of the 30 Greenpeace activists signals Russia’s willingness to use military force to protect their Arctic interests, according to the UK’s former Secretary of State for Defence.

Speaking at the Royal United Services Institute in London yesterday, Liam Fox MP said that Russia’s military was now boosting its capacity in the region as the country prepares to drill for oil and gas.

“Those who say that Russia is unlikely to put anything other than its own national interests first towards the Arctic that it considers as its own backyard are, in my opinion, correct,” he said.

He pointed towards the Greenpeace dispute, where Russian authorities seized activists who boarded an oil rig owned by Gazprom, as one example of a continuing trend that points to “decreasing rather than increasing cooperation from Russia”.

Initially charged with piracy, which has now been changed to hooliganism, the ‘Arctic 30’ remain imprisoned in Russia, and face sentences of up to seven years. David Cameron has said he will consider directly contacting President Vladamir Putin if it will help to secure their release.

The Arctic region could become a new battleground over the coming years, as melting polar ice opens up new shipping routes and eases access to a potential treasure trove of natural resources, such as oil and gas.

In 2008, the US Geological Survey predicted that the Arctic could hold up to about 13% of the world’s undiscovered oil reserves, and as much as 30% of undiscovered natural gas reserves. Shell, Exxon Mobil and Gazprom have all expressed interest in drilling in the area.

This, as Fox pointed out, is accompanied by further valuable resources such as fish, diamonds and uranium. “The five coastline nations are unlikely to forgo their potential stake in these resources easily,” he said.

Businesses are already beginning to stake a claim, and massive national interests are at stake. James Gray MP, also speaking at the conference, said that the discussions had now largely moved on from whether businesses should be operating in the Arctic, to how it can best move into the region.

“I expect we’re further down the road than that,” he said. “Whether we like it or not, these things are going to happen.”

As such, unclear territorial claims in the Arctic could become a potential source of conflict. It is just one of the many security threats that the world is facing thanks to the changing climate, with a recent report saying that over 100 countries are now concerned about the conflict that resource scarcity and extreme weather events could cause.

Fox said: “Sadly, it appears to me that mutual suspicion may be on the rise, and many have begun to assert their claims to the arctic and its potentially abundant resources with increasing economic and military activity.”

The rush for resources, says Fox, has already led Russia to publicly clash with Canada, while attempts to claim the Lomonosov Ridge and the Mendelev Ridge as extensions of the Eurasian continent – claims which which would bring almost half of the Arctic ocean into Russian territory – have brought them into conflict with Denmark.

This has been accompanied by heightened military activity. Russia’s 2009 national security strategy, which analyses threats up to 2020, states: “In a competition for resources it cannot be ruled out that military force could be used to resolve emerging problems that would destroy the balance of forces near the borders of Russia and her allies.”

Since then, Russia has apparently lived up to its promise, with Putin announcing his intention in February this year to reopen a military base in the New Siberian Islands, with the return of a taskforce to the area in September signalling the return of a permanent Russian military presence in the Arctic.

“Such moves are undoubtedly an attempt to reinstate naval authority in a strategically important part of the Arctic,” commented Fox.

Fox also pointed to the role of research trips in establishing territorial claims. The most famous of these, he said, was in 2007 when the Russians “took water and soil samples for analysis from the arctic sea bed and left behind a non-rustable Russian flag.”

But not everyone agrees with Fox’s assessment. Alan Kessel, the Canadian Deputy High Commissioner, diverged from his planned speech to rebut the claims of international tensions. “We don’t have them, we didn’t have them and we’re unlikely to have them,” he said.

“Flags are a stunt – we all know that. The Russians know that.

“If flags meant anything, then the Americans would own the moon and National Geographic would own the Himalayas – and they don’t. It’s a stunt. It just meant ‘we were there’. They could have done it with a magic marker.”

The UN Convention on the Law of the Sea, he said, which was adopted in 1982, has been highly successful in ensuring that disputes are swiftly resolved.

“It was designed for us not to bump into each other in the Arctic. It was designed to ensure those of us who did have overlapping territorial interests would resolve them peacefully.”