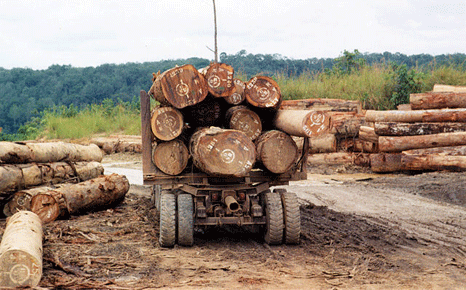 The UN hopes a new treaty signed by African governments, industry representatives and civil society organisations this week will slow levels of illegal timber trading in the Congo Basin.

The Brazzaville Declaration marks the latest effort by the international community to slow the destruction of Africa’s rainforests.

Covering an area of 300 million hectares, the Congo Basin harbours the world’s second largest tropical forest, but the UN estimates net forest loss is around 700,000 hectares a year.

The agreement recognises the “importance of the forestry sector in the socio-economic development and its contribution to food security and nutrition on the one hand and its role in the preservation of the global climate and biodiversity conservation on the other.”

Recent research shows that Congo Basin tree species are larger in stature on average than their Amazon counterparts, suggesting the African rainforest may be a larger carbon storehouse and a crucial resource for productive and sustainable forest management.

WWF says up to a fifth of global greenhouse gas emissions come from deforestation and forest degradation.

Trees in the Congo Basin are also a major source of illegal timber, part of a global trade that costs governments around $10 billion per year in lost tax revenues worldwide.

Simon Counsell, executive director of campaign group Rainforest Foundation UK described the agreement as an ‘important step’, but argued it needs to be more ambitious.

“Noticeably, the declaration has nothing to say about the potential role of local communities, of which there are many tens of thousands in the Central African forests, in helping to protect their environment and prevent illegal destruction, nor indeed about civil society organisations,” he said.

“In many ways this reads more as a ‘timber industry charter’ than it does something aimed at preventing forest destruction, and appears to learn nothing from the previous decades of experience in this region and elsewhere.”