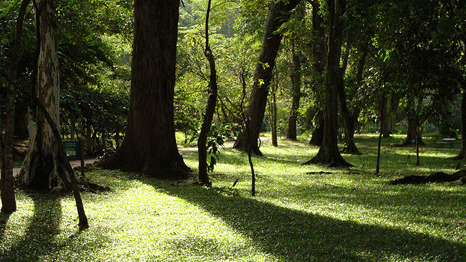 Over the next two centuries, forests will shrink until they cover just 22% of the world’s surface, scientists predict.

Forests have been in serious decline worldwide since 1990, having lost over 70 million hectares over the last two decades – a land mass greater than France, or 0.5% of global land area – due to agricultural land expanding to feed a growing population.

It is a trend that is set to continue, write the researchers in an article published in this week’s PLOS ONE journal, with coverage projected to drop by another 8% from current levels, before stabilising at 22% of the world’s land mass.

Forests are a valuable asset when balancing the global carbon budget, helping to sequester some of the CO2 emitted by humans into the air, as well as hosting a range of plants and animals.

Scientists from Guelph University in Ontario, Canada, arrived at this figure using models based around projected agricultural demand over the next two centuries.

They calculate that 67% of the Earth’s land area will need to be either agricultural or urban to support a projected population of 10 billion. Since around 15% of the planet is classified as arid, this leaves little room for forest cover. Wild pasture will cover a further 1.4% of land.

“Based on this model, we are most likely going to see forest cover decline around the world,” says Madhur Anand, co-author of the study.

“We realize that no one can determine the future, and there could be drastic changes in agricultural yield, food technologies or diet which could impact on our findings, but we attempted to explore those kinds of changes in our scenarios.”

In spite of an overall decline, the scientists note that, in certain industrialised regions, forest cover has actually increased – but this is not necessarily indicative of successful conservation efforts.

They write: “A national-scale forest transition is often heralded as a great success in forest management and conservation; however, some countries achieve this simply by importing more food and forest products.”

As such, an increase forest cover could actually be the result of the mismanagement of forest and agricultural resources. They add that calculating forest cover on a global scale, rather than region by region, is the best way to get a representative perspective of the scale of the problem, as this takes into account the role played by international trade.

“Countries need to realize that this is a global issue, and if forests are to be preserved and even grow, co-operation through intergovernmental organizations will have to continue to happen,” says Anand.

“Industrial countries could, for example, disseminate technologies to developing countries, reducing the amount of land needed for agriculture. Otherwise, we will see forests get smaller and smaller.”

Yesterday, WWF launched a new initiative, the Green Heart of Europe, to protect nature across 12 countries in Central and Eastern Europe, which contain the largest remaining area of virgin and natural forests in Europe outside of northern Scandinavia and Russia.

“The people of this region depend on these natural treasures. They provide us with essential goods and services, from timber and fish to clean water and climate regulation, and the essential ‘green infrastructure’ that secures our livelihoods and well-being,” said WWF’s Conservation Director for Central and Eastern Europe, Orieta Hulea.

Fortunately, the scientists point out in their paper that, should certain practices of less-intensive agriculture become more in demand, pressure on the forests could be relieved. Unfortunately, one future eating habit they suggest is the adoption of insects into our diet.

They write: “increased dependence on aquaculture and insect protein could have an enormous impact on reducing pressure on the world’s remaining natural land habitats…

“In vitro-cultured meat or the widespread adoption of alternative protein sources could change the face of the planet.”