Leaders of IMF, OECD and World Bank all called for greater climate ambition and investment this week 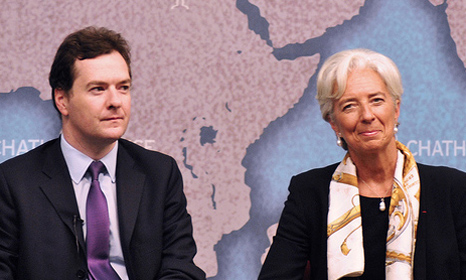 The multi-billion-dollar global fossil fuel industry might be getting just a little bit worried.

In recent days, some of the biggest guns in the world of finance have all had the industry in their sights, calling for a cut back on fossil fuel subsidies and the fast-tracking of carbon trading schemes, or for the wider application of taxes on carbon.

Jim Yong Kim, head of the World Bank, and Christine Lagarde, managing director of the International Monetary Fund (IMF), held a joint news conference in which they stressed that climate change must be the main priority of both institutions.

“It is important that our two institutions always have climate change, environmental issues and price setting at the forefront of our agenda,” Lagarde said. “We have got to think about it every day.”

Establishing a proper price for carbon and removing energy subsidies were the IMF’s priorities, Lagarde said.  “If you do it the right way, you can put subsidies where they are needed.”

Jim Yong Kim said the priorities for the World Bank were to invest in sustainable energy for all, well-designed cities, and what he called smart agriculture. He said cutting fossil fuel subsidies was often “politically difficult”, but there were encouraging signs around the world from the implementation of carbon taxes.

Angel Gurria, the head of the Organisation for Economic Co-operation and Development (OECD), joined in the chorus, saying governments must take immediate action aimed at pricing carbon and abolishing fossil fuel subsidies.

“According to the latest International Energy Agency [IEA] estimates, subsidies to fossil fuel consumers in developing and emerging economies totalled US$ 523bn in 2011,” Gurria said.

“In many countries, these subsidies are used as a substitute for poverty relief. That is understandable, since energy is one of the fundamental basic human necessities.

“But such subsidies are generally poorly targeted, and instead end up being captured overwhelmingly by better-off households who can afford larger cars and houses that consume more energy. These subsidies are bad for the economy, bad for the environment, and also bad in terms of social justice.”

Meanwhile, a report by a group of academics at Oxford University has warned the fossil fuel industry that it could not afford to ignore a growing high-profile campaign urging investors to withdraw their cash from companies involved with fossil fuels.

Others point out that if meaningful action is to be taken on climate change, the bulk of fossil fuel company assets have to stay in the ground. This means that industry conglomerates are grossly overvalued and a carbon bubble is likely to burst in the near future.

The World Bank and a number of other financial institutions announced earlier this year that they were scaling back or stopping altogether funding for new coal-fired power projects. The US administration also said it would stop investing in coal projects overseas.

But it’s unlikely that the fossil fuel industry will be heading for the bunkers any time soon.

The World Bank still provides multi-million-dollar funding for fossil fuel projects. The US might have stopped funding coal projects overseas, but its coal exports are booming like never before.

And in Britain there were calls this week for the abolition of subsidies – not for fossil fuels but for the renewable energy industry.