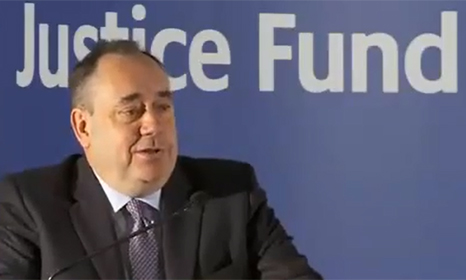 An independent Scotland would make climate justice a central pillar in its policymaking process, Alex Salmond told an audience in Edinburgh yesterday.

And speaking at an international Climate Justice Conference hosted by the Scottish Government, the First Minister said he was determined to push for a global climate agreement.

Salmond also revealed Scotland was doubling its Climate Justice Fund to £6 million. They money will go to increasing community resilience in developing countries to the impacts of global warming.

“The Scottish Government has been at the forefront of the fight against climate change, such as our ambitious emissions reduction and renewables targets,” he said.

“By doubling the Climate Justice Fund we can provide genuine life-saving and life-changing help to those communities.”

The move was welcomed by former Ireland President Mary Robinson, together with delegates from the UN and Clinton Foundation.

“This is a good practical example of what developed countries can do,” said Robinson.

“With 2015 set as the deadline for both a new climate agreement and the post-2015 development agenda, we are at the point in human development when we need to act urgently to protect people and to create opportunities for all.”

The £6 million fund is tiny compared to the UK’s International Climate Fund commitments of £3.87 billion up to 2015, but supporters say it is impressive, given its primary aim is to help resilience measures in vulnerable countries.

Established in 2011, it is supported by the country’s water budget, and has already directed nearly £3m towards projects in Malawi and Zambia.

It taps into a growing awareness of why climate justice is important. In essence, it stands for a recognition of the ethical and social impacts rising sea levels and extreme weather events could have.

“There is a huge opportunity for businesses that embrace a new model of responsible capitalism,” Robinson said.

“This goes well beyond Corporate Social Responsibility. It’s about a licence to lead, where the focus is on the long term, not on quarterly earnings and profit maximisation.”

Robinson’s call for ‘leadership’ evidently resonates with the Scottish government.

He told RTCC that climate justice is “a fundamental issue which links human rights to climate change and so the impact of climate change is helping [to improve] the quality of the lives of people who are least responsible for creating the problem in the first place.”

The fund and summit could be seen as part of a wider push by Scotland to differentiate itself from the rest of the UK as a vote on independence approaches.

Wheelhouse argues independence will not hinder Scotland’s climate justice plans, and its ambition to offer a neutral voice at UN climate change negotiations.

“We have a small budget in absolute terms, we’re not a huge financial player in the global economy but we can show leadership in terms of policy and give people practical examples [like] legislation [about our] approach to climate justice.”

UN talks on the design of a Green Climate Fund (GCF) are taking place in Paris this week, with a recurring theme the need to drive more funding from business into climate-related projects.

What makes Scotland’s CJF initiative so appealing to some campaign groups is the potential for private sector involvement, highlighted in two papers published this week by the IIED’s Simon Anderson.

Leveraging public money with private finances is a controversial topic with many development agencies, who believe business will ultimately seek to maximise profits in any transaction.

“There isn’t the money there to do the investment in adaptation and mitigation that we need,” he said, pointing to the business case of helping poor countries make a transition to more resilient economic models.

Robinson added: “It’s about a licence to lead, where the focus is on the long term, not on quarterly earnings and profit maximisation.

“The needs of citizens and communities should carry the same weight as those of shareholders. This is the social compact that exists between business and citizens”.