EU on course to hit 2020 carbon targets, but some states falling behind in renewables and efficiency sectors 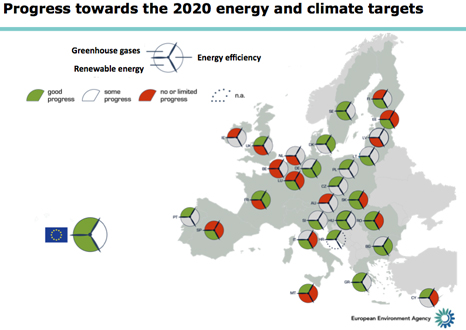 The EU is close to hitting its carbon reduction targets eight years ahead of schedule, according to a new report from the European Environment Agency.

Its latest assessment reveals the bloc has already achieved emission reductions of 18% on 1990 levels, while proposed low carbon policies could see a further drop of 24% by 2020.

The EEA warns that not all EU states are on track. Austria, Liechtenstein, Luxembourg and Spain need to purchase significant numbers of offset credits to meet their national targets.

It says Finland and Ireland will also have to implement new green policies to meet their own respective targets.

This latest study is likely to place further pressure on the EU to develop plans for a more ambitious set of 2030 targets.

The European Commission has promised to release further details of what this package could look like before a summit in March 2014. Previously the Commission has recommended a 40% reduction target for 2030.

In 2007 the EU Council adopted goals of 20% energy efficiency improvements, 20% share of renewable energy in final consumption and 20% emission reductions.

The report warns member states “need to double their use of renewables” to meet the legally binding target.

While 14 countries are on track to meet clean energy targets, it says Belgium, France, Latvia, Malta, the Netherlands and the UK are currently “below average”.

And it says only Bulgaria, Denmark, France and Germany are on course to reduce energy consumption and primary energy intensity.

“For most EU Member States, however, the current policies are not sufficiently developed or implemented across the relevant sectors,” it says.

“This is due to insufficient enforcement as well as impacts arising from the economic crisis.”

Campaign group Sandbag says the EU’s latest figures do not account for carbon offsets, which take emissions down to nearly 27% below 1990 levels in 2012, putting a 30% target within reach.

Around 500 million offset credits were submitted by European companies in 2012, exacerbating the vast surpluses of allowances in the EU Emissions Trading Scheme.

“It should be welcome news that Europe’s carbon emissions are already down so much, but the tragedy is we have failed to capture these emissions reductions by tightening climate policy,” he said.

“Without reform, the 2020 climate framework will undermine our future climate efforts by drowning them in spare carbon allowances. A 30% target in 2020 would be a simple way to prevent this.”