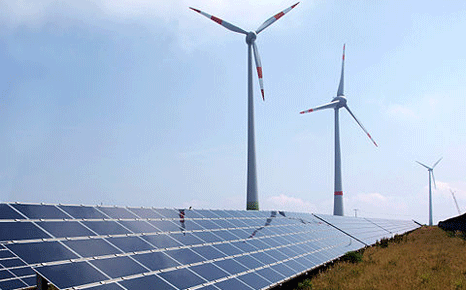 This year is set to be the first in which solar photovoltaics (PV) have added more megawatts than wind.

The slowdown in world’s two largest wind markets, China and the US, is opening the way for the rapidly growing PV market to overtake wind.

Bloomberg New Energy Finance (BNEF) has predicted that 33.8GW of new onshore wind farms, plus 1.7GW of offshore wind, will be added globally in 2013.

This compares with its forecast of 36.7GW of new PV capacity where China is set to lead the fastest uptake of solar in recent history, with plans to install more than 2GW of PV by the end of 2013.

“Europe is a declining market, because many countries there are rapidly moving away from incentives, but it will continue to see new PV capacity added.”

By the end of 2013, wind installations would have reached their lowest levels since 2008, but the future lies in the offshore industry.

Sarah Azau from the European Wind Energy Association told RTCC that the sector is in need of consistency from governments if it is to maintain its momentum.

“We are currently seeing some instability in some national markets due to changing renewable energy support schemes such as Spain. It is essential that regulatory frameworks are kept stable and that at EU level post-2020 legislation is put in place rapidly, centred on a binding 2030 target for renewables,” said Azau.

“This will give investors confidence and drive the wind energy sector forward with all the jobs, green growth, energy security and climate protection benefits it brings.”

A recent survey published by the BBC, found the majority of the UK was in favour of solar panels (84%) compared with 67% wanting to see more windfarms.

“Solar PV is seeing stronger public acceptance for onshore ground-mounted projects, in particular where local objection to wind turbines is the strongest.”

Colville also said that the case for solar is strong as a result of its quick turnaround compared to wind projects.

“A 5-10MW farm can be completed in a matter of weeks once the planning permission and grid interconnection issues are completed. Therefore, the solar PV industry is now capable of adding 40GW of capacity in a 12 month period easily.”

Despite the change in rankings for 2013, the maturing sectors of onshore wind and PV will contribute almost equally to the world’s new electricity capacity additions between now and 2030, according to BNEF.