‘Science is not finished until it’s communicated’ – UK chief scientist 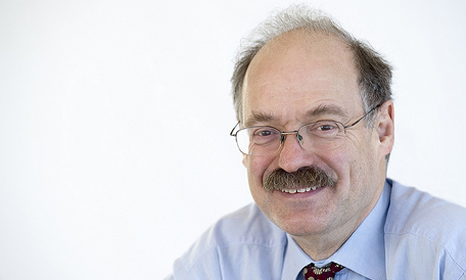 Projected onto the wall at the Royal Society is a climate science graph—a series of squiggles overlaid with jargon that to the 300 or so scientists in the room must make a lot of sense.

But for Professor Sir Mark Walport, Chief Scientific Advisor to the UK government, the problem on this occasion is not any thorny scientific conundrum that might arise from the graph, but how scientific research may be communicated to the general public.

It is an obstacle that has been reborn this week in the shape of the proliferation of media reports on the UN’s recent blockbuster climate change report from the IPCC.

If the public is going to understand climate science, he tells the assembled scientists, “we can’t show graphs like these.”

Walport is introducing a two day session of scientist-on-scientist discussion of the technical issues arising from the research contained within the IPCC, but he makes it clear that science doesn’t start and end in the laboratory.

“You need to communicate effectively,” he says. “This isn’t something just for government chief scientists; it is something for the scientific community.

“Science isn’t finished until it’s communicated. The communication to wider audiences is part of the job of being a scientist, and so how you communicate is absolutely vital.”

Apart from the few who have taken to Twitter and the blogosphere to spread the word of climate change, communication is not a task that comes naturally to most scientists.

Climate change in particular would undoubtedly come near the top of the list of subjects that are difficult to convey. Once you have overcome the barrier of scientific jargon, Sir Walport highlights climate science has the particular problem of dealing with numbers that are both too big and too small for the average person to be able to visualise.

“Then the small numbers: 0.9C of climate warming on the surface since 1901 doesn’t feel like very much, and people’s perception of temperature is that’s not very much.

“The very terminology doesn’t help us: global warming, climate warming. It’s actually about disruption, and I think that’s the sort of message we need to get across.”

Tamsin Edwards, a climate scientist at the University of Bristol, points out that differentiating ‘climate’ from ‘weather’ can also be a tricky point of communication, along with the way in which some people expect scientists to provide answers outside of their job description.

She tells RTCC: “People want us to say how can we predict what humans can do, when that’s not really part of our job. We’re trying to predict what would happen if we did a particular thing, rather than what would we do, the issue of climate being a long term thing.”

Images and infographics can be useful tools in communicating the message, but Ed Hawkins, a scientist from Reading University and a contributing author to the latest IPCC report, highlights that while bright colours may be more fun, it can also be a barrier to clarity.

“If you talk to visualisation experts, they will say that the rainbow colour bar is one of the worst colour bar choices you could make,” he tells RTCC. One of the problems with these, he says, is that they cannot be used by colour blind people.

“There are much better ways of doing it, and I think we need to learn how to do things better visually. It will improve communication and interpretation.”

All these issues amount to a monumental challenge, and one that the statistics would suggest that scientists have not yet overcome.

A recent study from Cardiff University suggests that, while three out of four people accept that the world’s climate is changing, the proportion of sceptics has increased by 15% in Britain since 2005.

“Of course, no one really knows what the reasons for these changes are, but there are three likely explanations,” explains Sir Walport.

“First, the global economic downturn is important, as people are worried about the money. Secondly there are the sustained sceptical voices in the media. And third there is this sense of ennui, that we’ve heard this and the world looks much the same to us in our day to day experience of weather, and so people have just got a bit bored.”

Despite the media training, the press conferences and the sudden, if brief, stardom of a number of climate scientists on the radio and television in the aftermath of the IPCC, there was a sudden proliferation of sceptical articles in the newspapers as critics of the report misrepresented figures and twisted data, either willfully other otherwise.

Tamsin Edwards takes a more forgiving view than most of these sceptical voices. She tells RTCC that they are not always ill-intentioned, and that it is important to take into account all views.

“I think if we’re going to get everyone on board with the fact that climate science is trustworthy and worth considering then we have to listen to climate sceptics,” she says.

“We’re getting better at trying to iron out the differences. We have to, because even if it’s not a large fraction of the public that disagrees with climate science, those few people can have quite a loud voice through blogs, through personal connections. These people make a difference.

“I definitely disagree with people who say we should ignore sceptics and hope they go away or try to shout them down—I think that’s a terrible idea. I think we just ought to work out where the differences are and why, and see if we can persuade them of a few things, and sometimes they persuade us of a few things.”

Communication is something that the IPCC has really focused on this year, including nineteen headlines the Summary for Policymakers to draw out the main points of the document.

Thomas Stocker tells RTCC that while in most sense it was a typical summary document, “In each of the subsections and the sections we have headline statements which basically try to summarize the scientific assessment into short understandable and quotable sentences

“That was our attempt to facilitate communication, to make one more step towards the public and the policymakers.”

But an important point is that the headline statements are not reductive. The top criteria, he says, is that all elements are “robust and dependable”, even if this makes the headline ostensibly less interesting.

“We wouldn’t pick an issue or a figure that is covered only by a very few publications to put at the top of the document,” he says.

“One example concerns the decadal temperature increases since 1850,” he explains. “You have the choice either to say we are now currently experiencing the hottest decade in the past 160 years, or you can say the past three decades have been the warmest of the past 150 years.

“For the Summary for Policymakers we’ve chosen to remain robust rather than go for a punchy headline.”