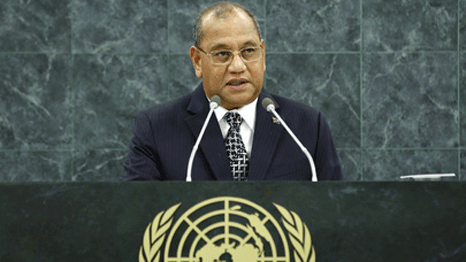 Christopher Loeak, President of the Republic of the Marshall Islands, addresses the 68th session of the General Assembly. (Source: UN)

The President of the Marshall Islands presented the recently adopted Majuro Declaration on climate change to Ban Ki-moon as a “Pacific gift” at the UN General Assembly last week.

The Declaration was signed at the Pacific Islands Forum last month, where leaders from the region hoped to raise awareness of the urgency of the situation in the Marshall Islands in particular, where rising sea levels threaten to submerge the low lying land.

It on calls on all governments to do as much as they can to halt climate change, and to take specific emissions reduction pledges that will help them to achieve this end.

President Christopher Loeak presented the Declaration to Ban Ki-moon to go alongside his own efforts to stimulate a new wave of climate leadership. During the General Assembly, Ban called for leaders worldwide to come together in 2014 for a ‘Climate Summit’, which would hopefully pave the way towards a legally binding agreement in 2015.

Speaking at the General Assembly, Loeak said: “Climate change is a risk that demands direct political ownership, and it is well time that other Leaders stand alongside the Pacific in creating the statesmanship so urgently needed.

“Simply repeating well-worn negotiation slogans will get the world nowhere – it is time for new solutions. I strongly urge my fellow Leaders to engage “eye to eye” at the Secretary-General’s climate summit next year- never has the need been so dire for true statesmanship.”

During a meeting with the Pacific island leaders during the Assembly, Ban said: “Climate change is the greatest single threat to our sustainable development agenda and to our long-term security.

“Pacific Islands are among those that contribute least to global warming, yet suffer most. I congratulate you on the adoption of the Majuro Declaration for Climate Leadership. I commend your resolve to be ‘Climate Leaders’ and I join you in your call to others [to lead through action].”