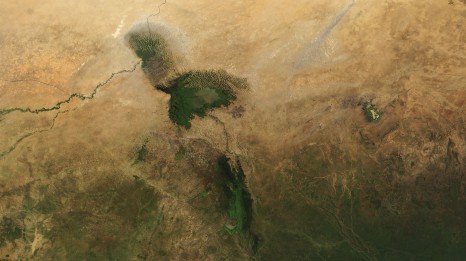 This week’s IPCC climate science report should shake world leaders out of the illusion that collapsing ecosystems are not their problem, a senior UN official has warned.

The head of the UN’s desertification body was speaking in Namibia at a high level summit aimed at delivering a global deal to slow land degradation.

“I look forward to seeing parties here have a greater sense of urgency,” Luc Gnacadja said.

“In some areas of Africa, north of Mali, northwest of Chad as well as Niger – they have already reached +2C of temperature increase.

“We are just in 2013, but the target is not to reach +2C by the end of this century, so there is a real sense of urgency that policymakers need to have here.”

Governments agreed to try and limit warming to 2C above pre-industrial levels in 2009, citing studies that warn rises above that mark could lead to catastrophic climate impacts.

Drafts from the IPCC’s forthcoming AR5 report seen by RTCC indicate temperatures in North Africa could soar 6C by 2100, while rainfalls could decrease 50% at certain times of the year.

There is increasing evidence that high levels of the climate warming gas carbon dioxide is being released from soil, as a result of deforestation and collapsing ecosystems.

This week over 190 countries have gathered in the Namibian capital Windhoek to discuss plans to set national targets to preserve forests and grasslands, and restore lands damaged by industry or farming.

A study due to be published later on Tuesday underlines the shattering economic impacts land degradation is starting to have around the world.

“Between 10–20% of drylands are degraded and 24% of globally usable land on Earth is degraded at an estimated economic loss of US$40 billion per year,” it says.

The authors say the the adoption of better land management practices could offer benefits of US$14 trillion, benefitting the 1.2 billion people who rely directly on the land for farming and income.

Another report released this week by Oxfam says climate change is likely to reduce food production and also the nutritional value of crops and livestock.

It cites dramatically reduced harvests in the USA, Russia, Pakistan and Nepal as a result of erratic and extreme weather events.

“Leaders listening to the latest findings from climate scientists this week must remember that a hot world is a hungry world,” said Oxfam’s Tim Gore.

Evidence from the UN summit’s hosts Namibia would appear to support the findings of these studies.

The country’s Minister of Environment Uahekua Herunga says the country’s current drought, reported to be its worst in 30 years, has forced the government to divert funding from health, transport and education to help affected communities.

The country can expect an increase in droughts in the coming decades, the IPCC’s report will warn, with rainfall dropping up to 30% by 2046.

The country’s National Drought Emergency Response Plan classed 463,581 people as ‘food insecure’, estimating 109,000 children under 5 are at risk of malnutrition.

Currently the country appears to be coping, but Herunga outlined some of the more drastic measures the country was taking to ensure the lack of rain did not lead to famine.

“I have availed over 400 wildlife to be culled for human consumption. Because of drought and land degradation our people do not have enough food to eat,” he said.

“We have to use other resources to ensure our citizens do not starve. That is an economic impact. National resources that were supposed to go to other needs are being channelled to food security.”