At the opening of the UN General Assembly, Ban Ki-moon told leaders to stimulate greater action on climate change 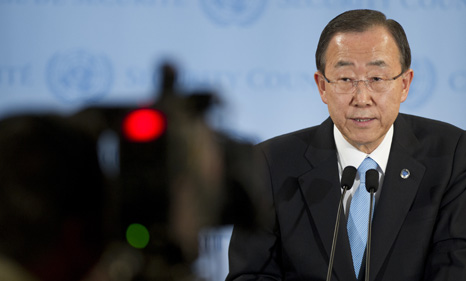 Ban Ki-moon today called upon leaders to come together in a Climate Summit one year from now to stimulate action on creating a legally binding deal in 2015.

Speaking at the opening of the UN General Assembly, the Secretary-General invited world leaders to attend a summit in 2014, equipped with bold pledges as the world attempts to reduce greenhouse gas emissions in order to keep the world below dangerous levels of global warming.

2015 is an important year in the climate change calendar, with the world set to come together under the UNFCCC, the branch of the UN responsible for coordinating climate action, to arrange a globally binding deal, as well as marking the end of the Millennium Development Goals.

These will be replaced with a set of Sustainable Development Goals, which are expected to reinvigorate the UN and stimulate greater action on environmental degradation as the world moves towards what it calls an “age of sustainable development”.

“Let us seize the 2015 challenge: a final push for the MDGs, new directions on energy and climate, and an inspiring new development framework,” said Ban, speaking at the UN conference in New York today.

It is hoped that the Summit will stimulate governments, business, finance, industry and civil society to contribute new commitments that can then be scaled upwards and replicated, helping the world shift towards a low-carbon economy.

Mary Robinson, former president of Ireland and UN Special Envoy to the Great Lakes, told RTCC in an interview this month, “I believe and support the idea that we need a new kind of leadership and I’m glad that the secretary general has decided to call together the heads of state in 2014 as part of that need for leadership.”

Any future climate negotiations from the UN are expected to take into account the IPCC report, the comprehensive review of the climate science since 2007, that is being released this Friday.

The report will confirm that it is 95% certain that the planet is warming and humans are responsible.

“Our planet and our scientists are sending a clear message, as we will see once again this week when the Intergovernmental Panel on Climate Change issues its latest assessment,” said Ban.

He added, “There is opportunity amid this peril – a chance to change the way we do business, plan our cities, fuel our homes and factories, and move our goods and ourselves.  A low-carbon path beckons – a path that can create jobs and improve public health while safeguarding the environment.”