Thousands of hectares of peatlands, especially in south-east Asia, are at risk from palm oil plantation developers 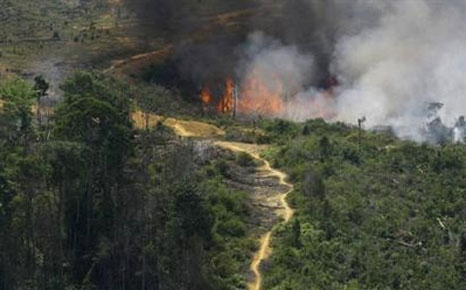 Indonesia suffers an estimated annual $1 billion in losses from the release of CO2 stored in its peatlands. (Pic: USDAgov)

How farmers care for peatlands can influence how well they soak up greenhouse gases, because the plants that grow there are crucial to their effectiveness as carbon sinks.

The trouble is that in many parts of the world peatlands are being destroyed or are under threat.

In south-east Asia hundreds of thousands of hectares of peatlands have been drained and destroyed in order to establish palm oil plantations.

In other parts of the world the need for more land for cereal crops or for grazing livestock has led to large-scale peatland destruction.

A new study looking at peaty moorlands in the UK says that it’s not just the peatlands which matter in terms of the storage of greenhouse gases.

The plant community growing in these areas also plays a key role in regulating greenhouse gas emissions, meaning that how the land is farmed can completely change its effectiveness as a carbon sink.

The study, by researchers at Lancaster University, the University of Manchester and the UK’s Centre for Ecology & Hydrology, and appearing in the journal Ecology Letters, focuses on an area of peaty moorland high up in the North Pennines in northern England.

Special warming chambers were erected on a site and temperatures increased by about 1°C to imitate predictions of global warming. Two main types of plant – heather and cotton grass – were present.

The researchers found that when temperatures were increased over land dominated by heather, greater amounts of carbon dioxide (CO2) were absorbed from the atmosphere, making the area in general a more effective GHG sink.

But when the temperature was increased over a site dominated by cotton grass, less CO2 was absorbed from the atmosphere: the area’s effectiveness as a carbon sink decreased – with more methane being released.

Professor Richard Bardgett who led the research team said: “What surprised us was that changes in vegetation, which can result from land management or climate change itself, also had such a strong impact on greenhouse gas emissions and even changed the way that warming affected them.

“In other words, the diversity and make-up of the vegetation, which can be altered by the way the land is farmed, can completely change the sink strength of the ecosystem for carbon dioxide.

“This means that the way we manage peatland vegetation will strongly influence the way that peatland carbon sink strength responds to future climate change.”

Dr. Sue Ward, another member of the research team, said the study will be of interest and relevance to climate change scientists and policy makers.

“Setting up this experiment allowed us to test how greenhouse gas emissions are affected by a combination of changes in climate and changes in plant communities.

“By taking gas samples every month of the year, we were able to show that the types of plants growing in these ecosystems can modify the effects of increase in temperature,” said Dr Ward.

“Changes in vegetation as well as physical changes in climate should be taken into account when looking at how global change affects carbon cycling. Otherwise a vital part is missing – the biology is a key ingredient.”